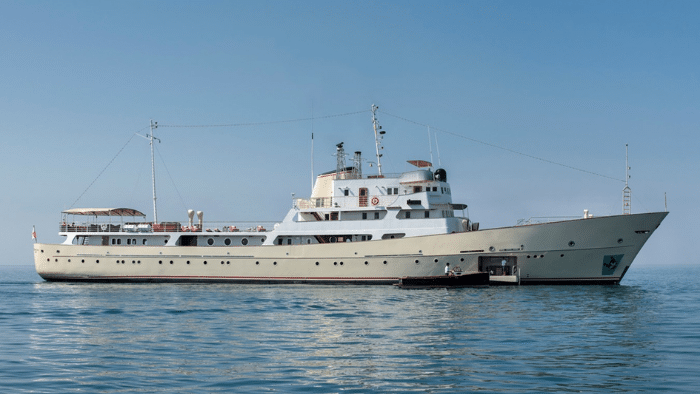 There are hundreds of yachts which turn heads today. Some with impressive size, shape, interiors, quality or speed. However, there are not so many that can impress with history together with pretty much everything we just mentioned. The luxury motor yacht we will talk about today is a fascinating combination of history, beauty and reliability.

LA SULTANA, A Relic From the Years of the Cold War

M/Y LA SULTANA is probably the only ship converted into modern yacht that is a relic from the years of the Cold War. She was built in 1962 in the biggest shipyard in Bulgaria located in Varna and called Georgi Dimitrov. She was ordered by Russia to join their fleet and had twelve sister ships. Although Bulgaria was not part of the Soviet Union, the country was very influenced by the Union and had good relationship with Russia leading to beneficial results such as the construction of Aji Petri. The main purpose of this motor yacht was to serve as a ferry carrying cargo and passengers in the Black Sea, Azov and Crimea seas between Istanbul, Odessa, Yalta and Sevastopol, namely Ukraine and Turkey today.

The Golden Age of Yachting

The 65 meter Aji Petri was able to carry 102 passengers in 40 cabins located amidships on the main deck, with 110 standing and had 46 crew members. Made of steel, she reflects the Golden Age of yachting. Her 3-meter draft made her perfect for the purpose she was built for, namely to be a ferry. With such a shallow draft she could and still can get to pretty much every port suitable for motor yachts.

Back in the days of the Cold War in the 70s something happened which not every ship or yacht could offer in her history – Aji Petri and her sister ships were used for political purposes. They were not the regular ferry ships in the Black Sea. Aji Petri was sent to the North Atlantic as a spy ship for the Russian government. The vessel was unofficially eavesdropping the communication between the United States and the United Kingdom. For almost two decades Aji Petri served the Soviet Union as a spy ship. However, after the dissolution of the USSR in the beginning of the 90s, the motor yacht got back to her original purpose – to transport freight and people between the ports in the Black Sea.

A Refit Without Any Cost Restrictions

Sixteen years later in 2007 when no one could imagine that such a ship could transform into a luxurious vessel, a miracle happened. The La Sultana Group bought the yacht and decided to run a refit without any restrictions of cost. This multi-million dollar refit took place on the coast of Morocco. The number of time spent on the work done is reported to be around seven years. To transform a ferry ship to a luxurious yacht takes a lot of work. However, the results are stunning and totally worth the expense.

From Cold War to Modern Times

During the repairs and reconstruction a variety of devices associated with the Cold War were found; this included long-range antennas, a detector for submarines, an aluminum insulation throughout the whole ship preventing the revealing of the ship’s communication, thick wires and a variety of other objects reminiscent of her history as a spy ship. The entire wiring system was changed. The cabins for 102 passengers were removed which was one of the most difficult transformations on the process. The repair work had been conducted by a team of naval architects and specialist from RINA. She was equipped with brand new Mitsubishi engine of 1060HP and four generators; the propeller was kept the same and today she can reach top speed of 13 knots and cruising speed of 11 knots. The vessel has a range of more than 5,000 nautical miles. The navigational equipment has been also updated with modern technology. To improve stability, a huge keel was installed to avoid the integration of dynamic stabilization. The list of technical improvements goes on and on.

As an investment of La Sultana Group, Aji Petri was renamed to LA SULTANA which definitely suits this luxury motor yacht. After the total makeover of this classic gentleman’s yacht, the interior has been converted into a display of the fascinating craftsmen’s work of the Moroccan people using a combination of woods from the Atlas mountains such as mahogany, cherry wood and cedar, Brazilian cherry and wood from their tropical forests, marble and onyx, silk and velvet. A variety of artwork masterpieces could be seen on board by Jilali Gharbaoui and Edouard Edy-Legrand.

LA SULTANA doesn’t have 40 cabins any more, but only seven with the owners’ suite on the upper deck offering 66 square meters, glamourous views to the bow and the horizon, 2 deluxe suites on the main deck and four guest cabins on the lower deck, each with their own charismatic interiors and glamour. The central staircase is one of the most beautiful ones you could see on board a yacht today. The interior throughout LA SULTANA is heavy and balanced at the same time, a fascinating combination of art deco and oriental style evoking the idea of luxurious liners back in the days when only the richest of the rich could afford such a yacht experience. The dining areas, the staterooms, the saloons, all gathering areas, the original port holes are a reflection of a different time when traveling was romantic and exotic. However, every luxurious motor yacht today features a variety of additional entertainment opportunities on board and LA SULTANA doesn’t disappoint. This once spy ship offers a beach club, helipad, swimming pool, hammam, Jacuzzi, a long list of water toys and even a Mini – Moke jeep for activities on land. The yacht even has three tenders. Even though the vessel was thoroughly refurbished, the designers left some pieces of equipment from the old days to keep that melancholic feeling of a historic ship. One of these devices is the chadburn telegraph which is in Bulgarian and has the initials of the Bulgarian Marine Fleet. To achieve the perfect blend of tradition and modernity and to get back the elegant classic silhouette, the masts were installed back in place.

This breathtaking motor yacht went back in the water in 2015 and today is for sale and charter. Cruising on such a yacht is like time travel to the Golden Age of yachting. Her astonishing features and history make cruising on her an experience of a lifetime.

You can learn more about LA SULTANA from the Camper and Nicholsons.