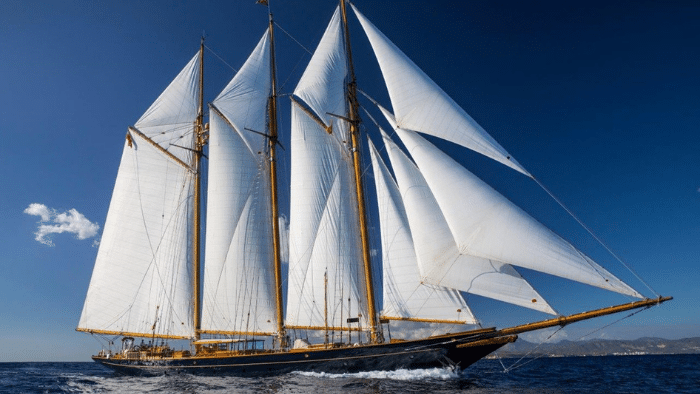 In today’s article we will show appreciation of one of the oldest yachts in our system offered for sale today. No matter her age she presents beauty inside and out and has some interesting stories behind her. The first yacht of the Legends of the Seas Series is SHENANDOAH OF SARK. The sailing yacht has survived two World Wars and here is her story.

Glamorous Survivor Throughout the Years

SHENANDOAH OF SARK is a 55 m yacht built by Townsend & Downey more than a century ago (1902) in a shipyard near Staten Island, New York. The vessel has such an amazing history that a really good book could be written about her. This glamorous survivor throughout the years was a result of the genius of the maritime designer Theodore Ferris, and she is the only representative of his work still sailing today. In 1905 the yacht makes her first voyage to the Mediterranean hosting numerous parties attended by nobles in that time. Years of various ownership followed during World War I and then she went to an Italian, a prince and Mayor of Rome, Ludovico Potenziani.

Transforming Into A Modern Sailing Yacht

During one of the events he hosted onboard SHENANDOAH, a Danish gentleman appeared and wanted to buy the vessel immediately. The new owner of the beauty was the Danish sculptor Count Viggo Jarl. Under his ownership, SHENANDOAH was maintained in an exceptional way transforming her into a modern yacht of the new age. That was a glamorous period for the topsail schooner and her owner. She was used for what she was created for – to sail the oceans, explore the world while enjoying sailing yacht’s luxury. The topsail schooner got to sail the Greek Islands, Red Sea, West Indies, the Caribbean, the Panama Canal, South America and even the Amazon, Hawaii and back to Northern Europe. This is where Jarl took the important decision to cease yacht’s usage and hide her during the World War II, because he suggested Germans would be interested in owning her. This is why he removed her two diesel engines and masts and made her look useless. The sailing yacht did survive the war without being touched and kept fulfilling adventurous trips to Africa and the Mediterranean welcoming princes and princesses, kings and queens … she lived in golden times. However, not too long after the war, an economic crisis hit Jarl and he didn’t have the choice but to sell his passion – SHENANDOAH.

Next are the years when the sailing yacht is suggested to have been involved in dirty businesses with guns, drugs and illegal cargo in the area of the Caribbean and the Americas. Her ownership was not very clear, but it is believed she was the property of a company from Honduras. Years passed and yacht’s condition was worsening with unclear ownership. She was back in France and already owned by the government when her savior appeared – through a two year of negotiation led by Baron Marcel Bich to finally buy the vessel. For those of you who don’t know who this gentleman is – he is an Italian industrialist who created the ballpoint pen BIC that there is probably no person in the developed world who hasn’t used at least once in his life. This was a crucial moment in SHENANDOAH’s life because Bich together with Captain Joe renovated the vessel completely in accordance to the first plans of designer Ferris and brought back the glamour which the yacht once had. Fourteen years of splendor, SHENANDOAH spent in the Bich family. She was loved and perfectly maintained, and also offered for charter in the early 70s. In this same period, SHENANDOAH made it back home to Rhode Island for the first time after she left in 1905. The reason was the American’s Cup. She was not a participant, but a piece of art everyone could admire. Her beauty was also appreciated by Caroline Kennedy – daughter of the former president.

In the 80s the topsail schooner was the desired location for photoshoots for prestigious magazines such as VOGUE, shooting of music videos and hosting memorable events. This was the period when SHENANDOAH’s beauty could be seen even in the waters of South East Asia where wealthy individuals could rent her. Later that decade, the vessel got back to the Caribbean under new ownership – of Mr. Philip Bommer who saw the yacht at the early age of 13. Twenty years he spent on dreaming about the vessel and in the end he owned her.

More Glamorous Than Ever and Rising As a Winner

Until the early 90s the sailing yacht lived another glorious period and was appreciated by many high-profile individuals. She provided a five-star service. However, the new century didn’t start well for SHENANDOAH, she was not that perfectly maintained yacht and was not that desired anymore. Luckily a German owner saw the beauty left from that stunning vessel and made a trip to New Zealand with her. She arrived in disastrous condition. It was considered a better decision to purposely sink the ship because expenses for repairs were not worth it. But was it easy to sink that ship of glory with so much history behind? Obviously not…The owner couldn’t do it and he took the decision to resuscitate SHENANDOAH! A massive refit of thousands of hours of work gave new life to the yacht which was looking more glamorous than ever winning the award for Best Classic Yacht Restoration. No leaks were present anymore, no chances for her to sink…she was in such condition that she could even race the Millennium Cup superyacht regatta. Another race followed in 2001 in the America’s Cup Jubilee regatta which was the 150th time it was organized.

The German owner revived a legend and let SHENANDOAH build more fascinating stories. Almost ten years after the major repair work done by the McMullen and Wing shipyard in New Zealand, a new owner fell in love with her – a gentleman from Italy who appreciated the beauty and class of this magnificent vessel. In 2005 the Italian owner started another major refit to make the sailing yacht more practical. The team paid attention to every single detail on the boat spending 65,000 hours of work. All that work resulted in a glorious luxurious vessel loved by everyone who had the chance to see her.

Today, the boat is in pristine condition and keeps on crossing the oceans. Owning such a vessel is like owning pieces of history. SHENANDOAH went through ups and downs, wars and peaceful glorious moments, aristocrats and smugglers and made history deserving the pages of any renowned writer.