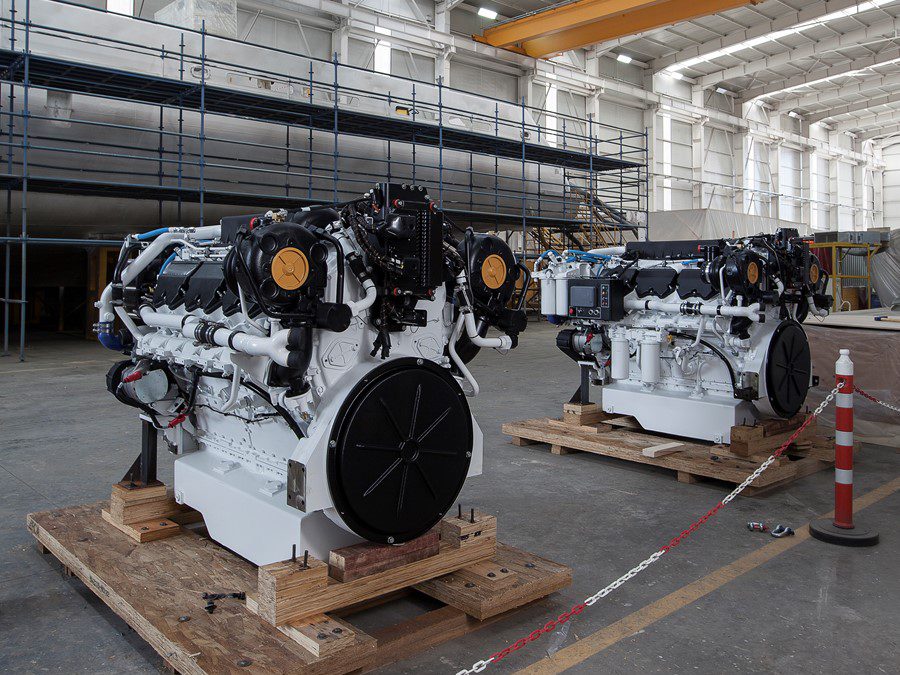 Below are five of the most popular yacht engine manufacturers that have been literally making yachting move forward.

When talking about inboards, there are a few brands which come straight to mind – CAT, MAN, MTU, Volvo and Cummins. Here below you can find more information about these so broadly used brands which have created revolutionary products helping the development of our industry. We rarely think of how a certain company has led to be a leader, so here is a little bit of a history of these innovators, survivors and winners.

Top 5 of the Engine Manufacturers

The history of Caterpillar dates back to 1886 when Benjamin Holt creates his first tractor in California. A few years later in 1892 the actual company was born known at this time as Holt Manufacturing Company. Thirty three years later the brand Caterpillar becomes a reality. Throughout the years the company has taken part in important construction projects in the USA and on an international level. In 1937, CAT machines help the completion of everyone’s favorite Golden Gate Bridge, take part in the construction of 70 000 miles of highways across the States during the period of the WWII, CAT engines supply power for the Apollo II mission to the moon and CAT machinery is used around the globe for the construction of dams and bridges. If this history doesn’t talk about reliability, what would.

CAT offers more than thirty (30) models of Commercial Propulsion Engines with a power range starting at 254 bkW and going as high as 16 800 kW. When narrowing our search, at the moment we can choose among 18 models suitable for pleasure yachts, fishing vessels, speed boats. For complete information on all the models and their features, visit the official CAT site HERE.

MTU is another great company with a very colorful history dating back from 1909. It all started in 1900 actually when Wilhelm Maybach – the person known as the “King of Designers” and the father of Mercedes, built the engines for the first engine-powered rigid airship. It was all happening in Germany. The company was initially called Luftfahrzeug-Motorenbau GmbH and had its focus on building engines for aircrafts, but also such suitable for land vehicles and marine crafts. The company had an extreme success during the WWI when there was a high demand for airplanes. In 1918 the company becomes Maybach-Motorenbau GmbH and one year later it starts the development of the first high speed diesel engine in the world – G 1 which got completed in 1923. The demand for train engines increased with the years and the company had to develop a new bigger and more powerful engine – the GO 6 which was the first turbocharged, high-speed, large diesel engine in the world. Proving itself as a reliable provider of quality engines, overcoming the destruction of its headquarters during the WWII, Maybach Motorenbau starts the production of engine for the maritime industry in 1953. Ship engines could transfer power of up to 3600 HP and the engines were either 8 or 16 cylinders. In the 60s the company unites with Mercedes Benz and becomes Maybach Mercedes-Benz Motorenbau. Since then the company has been releasing a variety of models suiting the needs of the maritime and train industry. One of the important moments in this period is the cooperation agreement between MTU and Detroid Diesel Corporation which was a guarantee for stable expansion in North America. Another crucial cooperation in 1995 giving technology advantage of the company is the unification with L’Orange which were the specialists in injection technology for large-scale diesel engines. This cooperation leads to the creation of the world’s first large diesel engine with common rail injection – the 4000 series. The following year in 1996, the 2000 series area fact and later the 8000. MTU is definitely a veteran in the production of engines for the marine industries and has proven itself as one of the most reliable and evolving companies.

Today MTU is one of the most preferred engine manufacturer for yachts of any type – standard yachts, performance yachts, displacement yachts and large luxury and mega yachts. Currently, MTU offers the following series of engines – Series 60, 1600, 2000, 1163 and 8000, which have different model designed to suit yacht and yacht owner’s needs. Starting at 261kW, MTU engines’ power gets up to 10 000kW for the big water crafts. MTU engines are known to have the best power-to-weight ratio. For complete description of the different models and engine series you can visit MTU official website HERE.

MAN is one of the most recognized names in the truck industry on a global scheme. A company with an impressive history of more than 250 years starting in 1758 in Germany. Since then, MAN has played an important role in the German industrial history. In the beginning the company started specializing in the construction of engines for trains and locomotives, together with printing machines. In 1845 MAN creates the first high-speed book-printing press. After the tough times during the WWI, the company founded M.A.N in 1915 with the clear vision to focus on the truck-vehicles production. An important move for the company was the established partnership with GHH – a company known to manufacture quality mining equipment – in 1920. Four years later MAN becomes the builder of the first diesel engine truck with direct fuel injection. Almost a decade after, MAN builds another first timer – the world’s most powerful heavy-duty truck with 140/150 hp at that time. After suffering severe losses during the period of the WWII, in 1970 the company leaves a deep mark in the marine sector by releasing the largest transmission on the planet in the sector. Another very remarkable fact related to the marine industry comes in 1987 when the company delivers the nine four-stroke diesel engines for the world famous cruise ship Queen Elizabeth II. At that time, the engine was the largest diesel-electric drive created for a vessel carrying people. Throughout the years MAN participates in different space projects. When entering the new millennium in 2000, this industrial veteran marks the manufacture of its 1 millionth truck.

With such a long and active history rich in technology developments and improvement, today the company has its yacht engines department. The range of product for luxury yachts and sportfishing vessels numbers nine different models starting at 537 kW and going up to 1397 kW. The company focuses on decreasing engine size while keeping full power, definitely a feature German manufacturers tend to implement very successfully. The MTU engines met in the yachting industry are known to be quiet with low levels of vibration. For complete information on modules and features of MAN engines, please, visit the official MAN site HERE.

Volvo PENTA is one of those companies which have played a key role in the yachting industry. We can search for the roots of the company as an engine manufacturer back in 1907 in Sweden. The manufacturer has a rich history of revolutionary technologies for the marine sector. The beginning of the 20th century was the moment when the company created its famous engine B1. The engine was called Penta coming from the Greek word for five. During the first meeting of reading the engine project, there were five people; as a result of their professional discussions, the engine was born and this is the reason why they decided to call it Penta. The engine models developed with the years and had a great success, but the WWI resulted into decreased profitability and the company had to keep the production low. However, something crucial happened in those years of crisis – a company called Volvo took a step towards Pentaverken (this is how the engine company was called). Volvo wanted to invest in Swedish-built car. This cooperation resulted very successful and for a period of three years almost 3000 engines were manufactured for Volvo. Ten years after Volvo and Pentaverken started working together, in 1935 Volvo took over the engine company and Volvo Pentaverken was born. The company’s focus was not only the production of automotive engines. As a result there are a series of technological achievements and first timers. In 1954 Volvo Pentaverken introduces the world’s first serial production turbo diesel engine followed by the first charged air-cooled marine diesel a couple of years later. The first big boom for the company in the yachting industry comes in 1959 when the Volvo Penta Aquamatic is presented during the New York Boat Show. The Aquamatic managed to combine the benefits of inboard and outboard engines. This is a revolutionary product for the industry. In the 60s the company is officially renamed to AB Volvo Penta and goes to a successful expansion across the USA and to the Middle East, and established key partnerships with boat builders. In the 70s the company keeps growing, Volvo Penta North America becomes a reality, the S-drive for sailboats gets introduced and various races around the globe are organized where boats with Volvo Penta engines participate. A variety of significant developments are introduced throughout the years. In 1983 the Duoprop was introduced, marking a significant step forward for the Aquamatic concept leading to greater efficiency and better handling characteristics compared with single propellers. The list of new models of engines and propulsion systems kept expanding and in 2005 Volvo Penta introduced the IPS – one of the most revolutionary systems improving boats maneuverability, fuel efficiency and speed as if as you are driving a car. Since then the system has been having tremendous success. For a period of four years only from 2005 to 2009 the company sold more than 10 000 pieces of IPS which is definitely a number talking for itself. After the introduction of the IPS, some of the most remarkable introductions are the joystick, the glass cockpit system, the forward drive system and the e-key remote.

This is just a short summery of the history of this company which deserves full respect. Volvo Penta offers engines and propulsion system for Power and Sail Boats. The product range is really diverse and can’t be simply represented in a sentence. For the complete list of products of this industry changer, please, visit the official Volvo Penta website HERE.

Cummins is one of those companies proving that talent, persistence and passion can lead to big things. The company was established in 1919 in Columbus, Indiana, USA as a result of the partnership between Clessie Cummins who was a passionate engineer building engines and the investor seeing Clessie’s talent William Glanton (W.G.) Irwin. Both partners were seeing the potential of the engine technology created years earlier by the German Rudolph Diesel. The company was not doing great in the first years, but thankfully Cummins’ genius, it was saved in 1929 when he mounted a diesel engine in an old Packard limousine which became the first diesel-powered car in the United States. This revolutionary introduction on the American marker brought tremendous growth in sales and income. Cummins succeeded to become the engine supplier for the truck industry. In 1940, engine development and product improvements led the company to be able to offer the first engine 100,000 –mile warranty. By combining lab-based research and field-based trials, including dramatic performances at the Indy 500 races, Cummins achieved technological breakthroughs, including the revolutionary PT (pressure-time) fuel injection system of 1954. Innovation, excellent leadership and organization helped the company to expand globally and by the end of the 60s had locations in almost hundred countries. Today Cummins creates engines for any type of vehicle.

In relation to the marine industry Cummins offers a variety commercial, government and recreational applications. Power systems start at 112 kW and go up to 3132 kW for recreational vessel. For complete information on the variety of marine engines, models and features, please, visit the official website of Cummins HERE.

These five companies have changed our industry. We are looking forward for all the newcomers on the market which will definitely leave a mark in yachting.