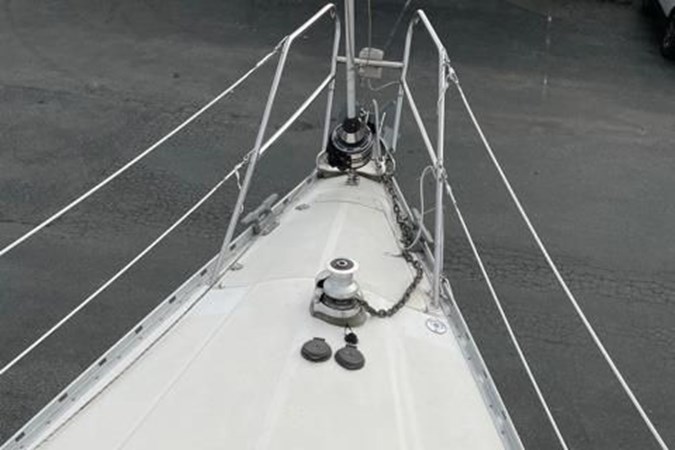 The Swedish built center cockpit has a low and sleek look rather than the clumsy, outsized look of most smaller center cockpits of the day.  She has a very practical tri cabin layout with plenty of room and privacy a hallmark of well designed center cockpits.  She has great looking joinery giving a cozy, comfortable feeling.  Peregrine is a great value and well worth seeing.

Starting at the bow, there is a Vee Berth with a sliding privacy door, hanging locker to starboard and an opening hatch and 12 Volt Fan for comfortable air circulation.

The Saloon has a convertible table/berth on port with a long settee across on starboard.  There are 2 opening ports and an opening hatch plus 2 fans and a couple of 12v lights for air and light.  There are a combination of shelves and cabinets above the settees on both hull sides.

Aft of Saloon on starboard is the Nav Station with the 12v/120v electric panels.  A radar and chart plotter RL70C Display, VHF and stereo radios and a Heart Interface Link 20 are in easy reach.

The Head follows aft with a composting commode and sink with pull-out shower and an exhaust fan and 12v light.  NOTE: all parts available to reconnect standard commode.

The Galley is on port aft of the Saloon and was completely rebuilt in 2008.  It features a Force 10 2-burner stove top with a microwave under, refrigeration, and sink. (See below for further details)

The 2005 Yanmar Engine Compartment is under the center-line Companionway which leads to a large, comfortable and safe cockpit which features a dodger with side hand rails and an arch that supports solar panels.

The Aft Cabin entrance is behind the Galley.  There are berths on either side of a center dressing area.  A filler is used to combine berths into a large double.  There are shelves along each hull side.  Opening hatch and 2 ports provide good ventilation and light.  Like all Center Cockpit Aft Cabins, it is exceptionally private and comfortable.

The Scanmar 35 has both a 12Volt Ship's Service and a 120Volt Shorepower Electrical Service.

Peregrine is a masthead rigged high aspect sloop with a single spreader mast. In 2007 mast was refit with all new Standing Rigging, new chainplates (Heavier than original but made by original equipment manufacturer in Sweden) and chromed bronze turnbuckles.

Engine and Mechanicals and Plumbing