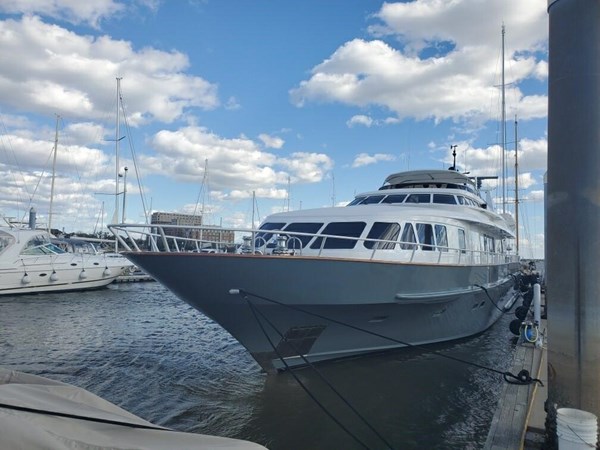 The entrance to the salon is from a center door from the aft deck. The flooring is Sapele wood with an inset of holly wood to give a traditional look to the yacht. Exotic Sapele woods and burls with inlays and curved columns frame the walls and large windows. Immediately to starboard when entering is a curved bar with an onyx top. A full complement of ice maker, wine cooler, and ample glass and bottle storage cabinets allows ease of use for many guests. On the port side, is a game table good for electronics, old-fashioned games or place a tablet or laptop.

An eye-catching feature of the salon is the custom ceiling panel over the central seating area. An oval painting of a map of the Caribbean Islands in this overhead panel gives a tropical touch to the decor. The furniture, decor, and rugs were all updated in 2015. This furniture is not built in so the new owner can change the decor easily, but the yacht is ready to use this season “as-is”. The headliners on the main deck were replaced in 2015, along with LED lighting to replace the halogen lights.

To starboard are storage cabinets and forward is the entertainment center with large flat screen television and additional storage areas. The satellite television system was updated in 2015 with a new KVH TV 5 antenna and receiver. At the same time, a New Wave WiFi system was Installed for WiFi throughout the yacht. The cabinets have the “Tommy Bahama" look to go with the tropical touch.

Going forward is a day head and access to the raised pilothouse and then the galley. The yacht has a "Country Kitchen" style galley finished in the same beautiful exotic woods as the main salon. This galley was installed in 2008 as an update from a smaller galley with a dining room, to a more desirable updated "Country Kitchen." Even the commercial size refrigerator has wooden doors with curved tops to give an elegant design.

The center here is a large island with a copper sink and extensive storage below including 4 under counter Sub Zero model 700 BH freezers. This island has a lunch counter design forward with stools for casual snacks and meals. Then forward of that is an oval table that seats at least six for breakfast and lunch. Between the main galley countertops, the center island, and more storage cabinets to starboard the chef will find ample room for preparing meals for large groups of family and friends. Crew access is from the galley area with a captain's cabin in a separate area aft.

Access to the four staterooms is from the forward end of the main salon. After descending the stairs from the main deck there is a central foyer with high gloss wood floors with an inlaid compass rose of exotic woods. The master stateroom is midship, full beam, with his and her heads to port and starboard. There is an oversized central shower. The king-size berth is center-line with nightstands to each side. The woods here are lighter colored maple to give a more open feeling along with light-colored leather panels.

Guest staterooms three and four are identical with double berths and en-suite head with stall shower.

Access is from the galley to the forward crew area with two cabins. Forward to port is a cabin with upper and lower berths and an ensuite head with a shared shower. To starboard is a cabin also with lower and upper berths ensuite head with shared shower. The captain's cabin with double berth, en-suite head, and shower is aft with access from the cockpit. There are two laundry areas, one in the forward crew and the other aft with the captain's cabin.

The command center of the yacht has a full complement of navigation equipment and controls and monitors for the ship's systems.

When the hull of the yacht was extended, the flybridge was extended also to give the room of a much larger yacht. The upper helm is located on the starboard side to give more room for entertainment and seating. Forward and to port on the bridge is a dining table for outdoor meals and snacks. A wet bar with a refrigerator and ice maker make cold drinks convenient. The ice maker was replaced in 2015.

There is a large sun pad and to the opposite side is bench seating with new exterior cushions. A gas barbecue grill is located to starboard and then aft to port la a large hot tub. Further aft of that is an open area that can be used for chaise lounges. The Bimini Top and the flybridge windscreen were replaced in the 2015 refit.

One of the greatest design features of the yacht is the huge covered teak aft deck. There are two large tables for dining with seating for more than a dozen guests and family. With a 25 foot beam, the space is huge and laid out for entertaining. Forward on the deck is a wet bar with an L-Shaped countertop, convenient for meal service, and large enough for a buffet. Hidden in the cabinets are a refrigerator and a new icemaker installed in 2015.

The forward table of varnished teak has a bench to one side and three chairs to the other side. The aft varnished teak table has a bench with room for four, plus four more chairs to the other side. The aft deck chairs were replaced in 2015. All of this area is covered from the sun, but open to the ocean breezes. A curving circular staircase leads to the flybridge and aft there are two curved stairways, one to each side, that lead to the large cockpit.

The cockpit makes a great area for access to the water. There is ample room to set up snorkel or dive gear, plenty of room to set up shore or beach excursions in the tender or swim directly from the swim platform. There is a fishing center (installed 2015) that could be removed or left in place with a circulating bait tank and ice maker.

The Motoryacht "WATERCOLOURS" was originally built as Trinity Yachts first build, hull number one, at 92 feet. In 2003 the yacht was purchased by the owners of Trinity Yachts and was brought back to Trinity for an extensive make-over. The yacht hull was extended to 115 feet by enlarging the back deck and adding a large cockpit. The Lazarette was changed and a private captain s cabin was installed here with an additional laundry station. New Caterpillar 3412 engines were installed, and the running gear was extended with an increase in size for rudders and stabilizer fins. Many of the ship's systems and services were rebuilt or replaced. In 2007 the yacht returned to Trinity for another major refit and update with the old-style galley and formal dining room changed to the more desirable country kitchen.