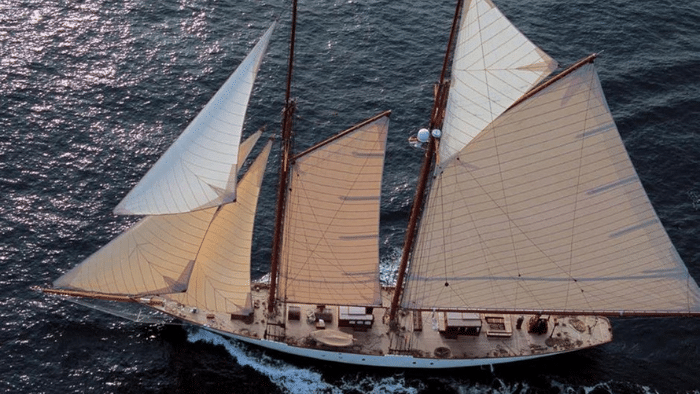 Hundreds of yachts and ships have survived more than a century of existence, but not all of them can offer a story that deserves a movie made after them. In today’s article we will present you the story of the 1905 George S Lawley & Sons sailing yacht – INVADER. Throughout her life, the yacht experienced glamour and disaster, triumphs and sad days, and endless changes of ownership. Her history is not entirely clear and there are some hypotheses in relation to the rotation of owners, trips and purposes of use of the classic sailing yacht. However, here is her colorful story in short.

Setting Coal in the Keel

The 41 meter sailing beauty was born in 1905 in South Boston where the renowned shipyard of George S Lawley & Sons took the risk to build a yacht with deep draft making her storage more difficult. Her design was penned by Albert Stanton Chesebrough who came from a family of some of the best naval designers of that time.

INVADER was owned by the coal magnate Roy Rainer who is believed to have sent coal to the shipyard with the idea to have it set in the concrete in the keel. Mr. Rainer was passionate about bringing his new beautiful yacht to participate in regattas and races. She did participate in sailing competitions but a little is known about how she did in them in her early existence.

For a period of nineteen years, INVADER didn’t experience her most glorious days. Various ownership transactions happened until she became the property of Don Lee in 1924 and was moved to the West Coast. He was a well-known businessman from California who was excited to see the potential of the vessel. He decided to put her back to her initial condition. All the rigging, sails and jibs were renewed. For just a few months her name was changed to NANCY LEE, which was Don’s daughter name. However, as it was believed that this change might have brought bad luck, in February 1925 the name was back to INVADER. In the following year took place one of the most important events from the history of this stunning vessel – the Transpacific regatta which is the biggest event on the West Coast of the US. That was the second largest event after the Americas Cup in terms of crowd interest.

Six ships participating in the regatta had to make the voyage from San Francisco to Honolulu, Hawaii for the shortest period possible. INVADER was the largest one with her biggest competitors POINSETTIA and MARINER, which was the yacht of the actor John Barrymore. It is believed that INVADER was the first ship that reached Diamond Head within a record time of 12 days, 2 hours, 48 minutes and 3 seconds.

No matter the fact that the yacht experienced a fire on board during the transpacific trip, she was the winner both for real and compensated time winning the most prestigious trophies – the “Lipton Cup” and “Morgan Adams Cup”. Some sources deny INVADER’s triumph for breaking a record which couldn’t be beaten until 1949, but she also had a record time on the way back, without a doubt.

In the beginning of the 30s, INVADER had another owner, Joseph M. Schenk – the head of The United Artists Studio among whose creators was Charlie Chaplin. He wanted to combine business and pleasure and had the idea to shoot movies on board INVADER. A long journey to Polynesia, Fiji, Tonga, New Hebrides, Solomon Islands, Indonesia and Hawaii was planned. As far as it is known INVADER did reach Tahiti and Moorea where she participated in the movie “Mr. Robinson Crusoe”. It is not totally clear if the ship completed the entire trip that was scheduled. In the mid-30s INVADER changed her role, and became a pleasure vessel for VIPs, gamblers and actors making cruises around the Californian coast connecting the major ports – San Francisco, San Diego and Los Angeles with Catalina Island. Until the beginning of the 40s INVADER was part of the plans of different businessmen who wanted to convert her into a ship for cruises and to involve her in expeditions to lesser known areas, but no information exists to prove whether it was a success or not.

Patrolling the Western Coast of the US

In 1942 INVADER became property of the Sailors’ Union of the Pacific to become a school ship for seamen. The ship went through a refit to be able to accommodate more crew on board. Until the end of WWII, it is believed that INVADER was serving as a ship patrolling around the coast of San Francisco and San Diego to alert the US Navy if foreign ships appeared. Decades of unhappy events followed for INVADER starting with a devastating fire in 1945 which burned the last sail formation of the pre-war years.

Change in Ownership Resulted In Years of Wonderful Restoration

Another period of transfers of ownership went through the history of the once glorious sailing yacht. There were intentions to convert her into floating casino, a ship for gatherings with big open spaces, a cruise ship and a houseboat. INVADER experienced another devastating fire which was close to destroying her. However, a ray of light was lit when INVADER was bought by R. L. Wood in 1961 who was the owner of “Wood Brothers”. She was moved to Alameda, California for a few years of restoration. She was back to her wonderful condition with five staterooms, three bathrooms, a galley, dining room and a saloon. She was carpet covered all over. For a decade she was kept in a marina in Oakland and was rarely used, but she was never abandoned.

Downsizing to a Motor Yacht and Cruise Ship

In the early seventies INVADER experienced another ownership rotation, and ended up in Hawaii where another refit was conducted aiming to make the necessary changes so she could get passenger ship status. In Hawaii INVADER didn’t do very well as a cruise ship. However, in 1983 the yacht had her passenger capacity increased to fit 200 seated guests and 300 standing, this making her one of the most popular vessels for cocktail parties and events in the area of San Diego. For ten years INVADER was a very fashionable place to be cruising on around the Californian coast and Mexico. In 1996 the yacht was deleted from the US register for the very first time and was registered in the British Virgin Islands.

A very important moment for INVADER happened in 1997 when she was in Palma de Mallorca, Spain. This is when Commander Giuliano Mussone saw her for first time and three years later he had to find a ship for the company he was working for – Blue Sea Inc. He then recalled the beauty of INVADER after seeing her in Spain and started researching where she was in that period. Commander Mussone found her in Germany in the Lurssen’s shipyard. There was a plain hull only with nothing left from the sailing yacht he had seen years earlier.

Back Into Racing in Regattas

No matter, Mussone knew her potential he purchased her. After digging into her historical background the commander and the new owner decided to put her under a massive refit which was going to bring her back to her initial look and purpose. The restoration took place in Italy – in Viareggio and La Spezia between 2001 and 2003. In December 2003 on the coast of the beautiful Cote d’Azur INVADER was rechristened with a huge celebratory ceremony. Even the direct descendants of the very first owner who ordered the vessel – Mr. Roy Rainer joined the celebration; this is how much a vessel could mean for owners sometimes. Back to her splendor, INVADER appeared as a guest ship in regattas such as the America’s Cup. She was brought back to life because Mussone believed in her potential. In her second decade after her back-to-glamour restoration, INVADER is one of the most beautiful classic sailing yachts in the Mediterranean and currently she calls Spain her home.

This stunning vessel is a survivor of the history which has a long story to reveal. INVADER is for sale with MORTOLA YACHTS.

The whole story of INVADER can be read here.