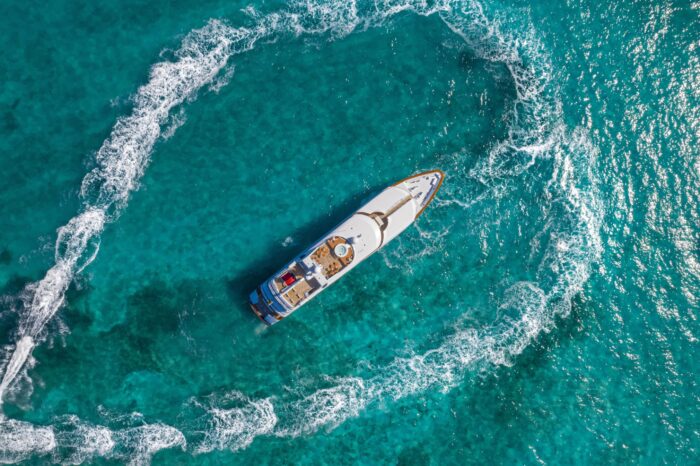 YATCO spoke with some of the most prolific superyacht photographers who hop on helicopters, send up their drones, and do whatever it takes to capture the shot.

Here, well-known photographer Billy Black tells us about his career and shows us the best of his work.

How did you get your start in yacht photography?

Billy got his start in marine photography by owning a Bruce King-designed sailboat and learning to sail it singlehanded all over New England. He was a fashion photographer in New York at the time, but realized his passion was the water and decided to follow it. We did lots and lots of shoots for small power and sailboat builders but one of the first big boats we shot a charter brochure on, Billy said that the deck would look nicer if it was wet and, Voila! The bosun showed up with the hose and the deck was wet. All of a sudden we were part of this eager and professional crew and the photos were spectacular. That’s his favorite part of a superyacht shoot: the experienced, passionate, and supremely professional crew we get to work with to make great photos.

We’ve been shooting big boats since 2001, back in the olden days of 4×5 film, when each interior scene took hours to setup. Now, working with his ace assistant Allison Barrett, we can shoot eight or nine scenes per twilight.

What was your most exciting shoot?

One of our most exciting shoots was in Newport on the 180-foot Feadship, Chantal Ma Vie. The captain, Jim Holman, is the consummate professional, running boats his whole life, and able to jump off the dock to join a helicopter shoot with an hour’s notice. Our favorite shot taken onboard was during that shoot with the Newport Bridge perfectly meeting its reflection in the sunset. Billy wanted to capture the beautiful sky and pointed out what would happen if the yacht turned 30° on the anchor. He and the engineer communicated by radio tweaking the angle until they got it. Everyone was excited!

Our favorite drone shot was of the Feadship Lady Victoria at Devil’s Backbone in the Bahamas. Yachts follow a pilot through the channel and there’s no circling back or stopping to catch the drone. It was great to pull it off.