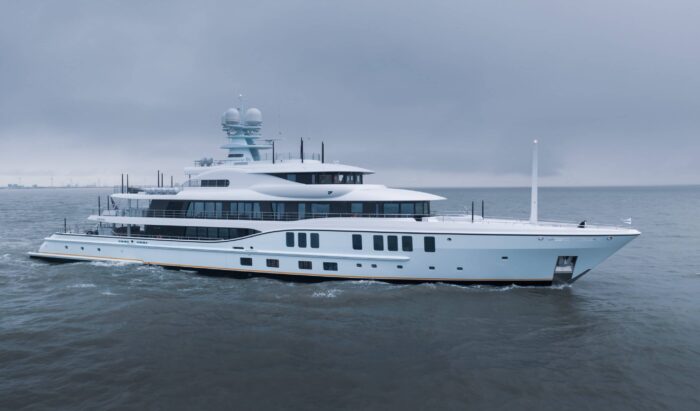 The unmistakable Amels 242 AVANTI has officially departed the Damen Yachting Vlissingen City shipyard in the Netherlands just one year after her sale was announced. Constructed under the project name SHADOW, her owner was represented by Moran Yacht & Ship for the purchase and completion of the yacht.

“We would like to congratulate the Damen Yachting shipyard, project managers, support staff, and skilled craftsmen and workers at the shipyard for their dedication and support throughout this project. We would also like to thank the owner for the trust they put in our team to complete this incredible project and the captain and crew for their hard work and tireless effort. It was a pleasure to once again work with the team at Damen Yachting on the construction of AVANTI and we look forward to many more successful deliveries with the yard in the future,” says Sean Moran.

Stemming from the successful Amels 242 Limited Editions range, she is the sixth yacht to be launched and delivered from the series and is the first IMO Tier III-compliant yacht in the range. Her distinctive Tim Heywood exterior yacht design was finished with an Ice-Blue hull and a Matterhorn white superstructure and features custom interior yacht design by Winch Design. She benefits from the proven naval architecture of Damen Yachting and features a gross tonnage of 1,790.

The superyacht accommodates twelve guests in six staterooms who are looked after by 19 crew. She features an exclusive owner’s deck, as well as grand lobbies and magnificent spaces. The luxury yacht’s garage carries 3 yacht tenders, as well as 2 wave runners and a professional diving equipment arrangement.