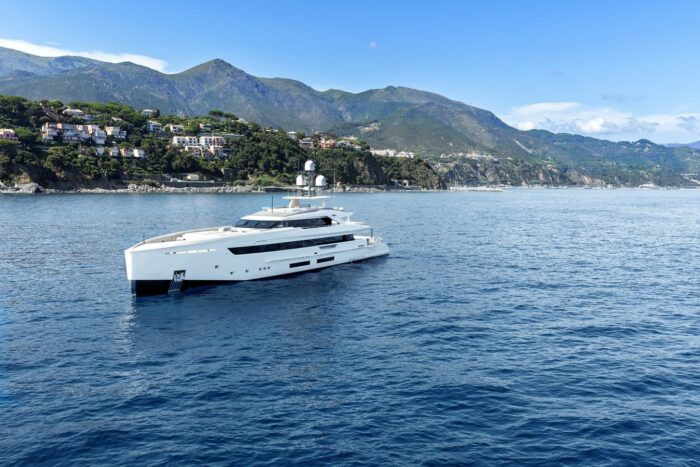 The hybrid motor yacht BINTADOR has been reported sold to a new owner. BINTADOR was sold in an in-house deal by Giancarlo Mussino, Managing Director of SINOS SA. Giancarlo had sold BINTADOR to her previous owner when she was just a project; he represented the owner during her construction and managed her for the past 3 years.

Recipient of the 2020 World Superyacht Awards

The 49-meter Tankoa build launched in 2019 by the notable shipyard and was the recipient of the 2020 World Superyacht Awards as the best superyacht below 499 GT and over 40m in length.

Equipped with a new generation hybrid propulsion system with 5 different cruising modes, she reaches a top speed of 18 knots and features a consumption of 70lt/hr at 10 knots cruising speed. The yacht had never been chartered and was in turn-key condition in every respect.

Interior and exterior design was by the celebrated Francesco Paszkowski and features an exclusive layout that spans four decks. Able to accommodate nine guests in four well-appointed staterooms, the yacht bestows her new owner a full-beam master suite on the main deck that features a private folding balcony, large en suite, a walk-in closet and an office.

BINTADOR has a fully equipped crew galley on the lower deck and a large, 21sqm galley on the main deck. She features vast outdoor spaces that are ideal for entertainment and relaxation, and also features a touch-and-go helipad.

Guests are treated to oversized salons, a beach club, a gym, indoor and outdoor dining areas, as well as a Jacuzzi.