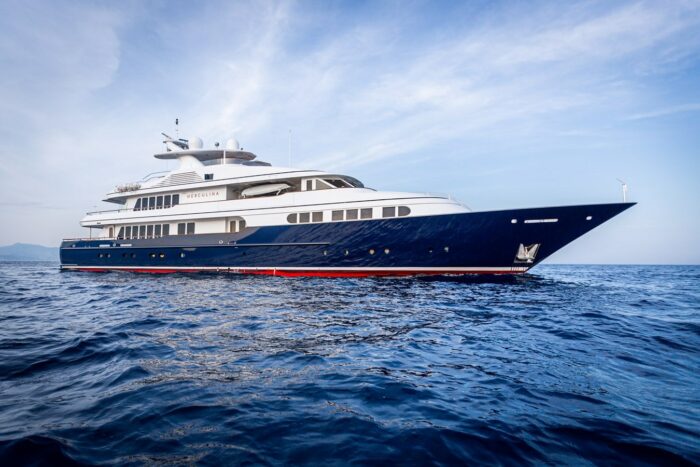 You won’t find the same superyacht bow on a fast, planing hull racing yacht as you will on a transatlantic luxury cruiser. That’s because the form of a boat’s bow shapes the overall “on-the-water” experience. It’s also why choosing the right bow depends a great deal on your cruising requirements and expectations.

Image caption: Herculina built in the Netherlands by Feadship

For example, a superyacht full bow increases interior volume, resulting in more spacious living areas. The trade-off? A rougher ride. So, you have to ask yourself: What’s more important? Comfort, seaworthiness or both?

Since the bow is where the yacht first meets the water, there are few things that have a greater impact on performance. Some important superyacht bow functions include:

Just as there are many yacht types, there are also any number of bows to choose from. Here are the top 10: Axe, Bulbous, Clipper, Cylindrical, Parabolic, Plumb, Raked, Ram, Reverse/Inverted and Spoon. For the purpose of this article, we’re going to focus on three of the most popular – Raked, Plumb and Reverse – and one outlier.

The Three Most Popular Superyacht Bows

The 163-foot, 5-cabin Herculina, pictured above and built in the Netherlands by Feadship, is an excellent example of a raked bow. The superyacht bow stem – the very tip of the bow – slants straight from the deck to the keel at an angle of less than 45 degrees. The place where the ship stem meets the waterline is called the rake. The rake’s acute angle is flat without a curve and forward. This forward waterline position allows for more and/or roomier living quarters, including a larger forward stateroom V-berth.

Along with their sleek, dramatic design and spacious berths, raked bows have several other favorable features. They can be used in conjunction with outward flaring hull forms to ease pitching, improve stability by raising the center of buoyancy and suppress splash and wash so decks stay dry. Raking also adds a measure of safety in case of a collision, because the bow stem comes in contact with the unwanted obstacle before the submerged part of the boat. Frequently found on production boats, raked bows are among the most popular because of their stability and streamlined good looks.

In construction, a level is a tool used to ensure something is horizontal and straight; its vertical counterpart is a plumb line, which is why an unraked bow – one with a straight edge – is known as a plumb bow. The 353-foot, 12-cabin, hybrid superyacht Luminosity (above) constructed by Italian shipbuilder Benetti is a picture-perfect example of a plumb bow: It’s practically perpendicular to the waterline. All you have to do is look at this motor yacht to know there’s smooth sailing ahead. And, it’s all thanks to the bow.

Because a plumb bow maximizes waterline length, it’s also a fuel saver and helps increase hull speed. In fact, race-boat designers are especially partial to plumb-shaped bows, because they know from experience, when paired with deep-fin keels, they provide the ideal foundation for speed. While a raked bow slices through rough waters, a plumb bow reduces resistance and has the potential to reach top speed on flatter seas.

A reverse bow, also referred to as an inverted bow, has its farthest forward point at the waterline – not at the top like a raked bow. Popular on battleships in the 20th century, an inverted bow’s main claim to fame is that it significantly reduces pitching, which besides being uncomfortable, slows the boat down.

A reverse bow, like the one on the elegant 180-foot, 4-cabin Forever One from Italian yacht builder ISA Yachts, helps maintain higher speeds in rough conditions and makes the boat easier to maneuver. Unfortunately, by extending the waterline forward, it reduces the forward deck area. All things – power, performance and volume – being pretty much equal, the primary reason for picking a reverse bow is because it just looks so cool. This might be one occasion where aesthetics and form win out over function.

Multihull cruising catamarans similar to the 289-foot Asean Lady, built by Pride Mega Yachts in China (shown above), are outliers when it comes to bows. First of all, they have two hulls instead of one, which quite often are different lengths and require two different size bows; and second, they’re owned by sailors at opposite ends of the spectrum. There are owners who live to race across the finish line, and then there are those who love an extended, leisurely cruise on a vessel that sports extra-wide beams and a dozen cabins.

Obviously, form follows function in this case. You can probably guess by their names – axe, wave-piercing, plumb and rake – which bows are for which owners. And, then there’s the Asean Lady – the outlier’s outlier. Her bow slants from the deck to the waterline just like a “rake” bow, but its angle is much less severe, softened. It might just qualify as a different bow shape altogether. Maybe “dual” or “modified rake” or simply “cat” bow. All of which proves, the #1 rule when investing in a yacht: While looks, power, performance, even bows, all factor into the equation, what matters most is how you plan to enjoy it.