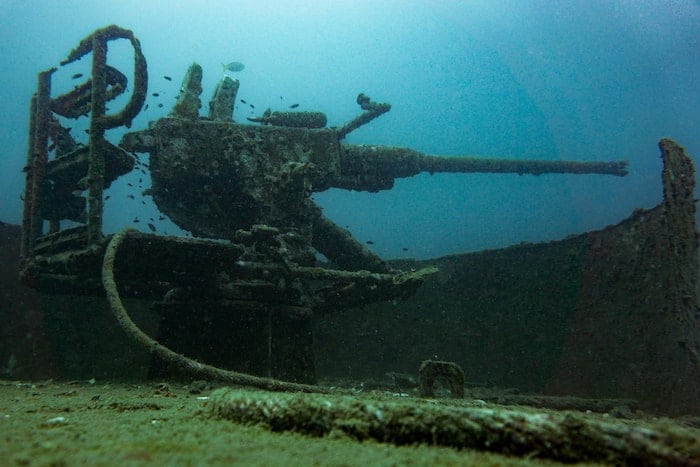 The ocean has always been a mystery on Earth. It offers incredible sceneries for those who dare to dive deep and discover the underwater world. Some of the most popular diving locations are where ships have been sunken and have created a magical new world in the ocean debris. There are different reasons for the vessel to end up on the bottom of the sea – some of them are intentional due to the ship’s lousy condition. Others have experienced emergencies, and third were participants in wars and failed in the battle.

Our compilation of five of the most intriguing war shipwreck from the First and Second World War offer breath-taking underwater views.

Our first pick is SMS Cöln. This ship dates back to WWI. The 115m light cruiser of the Cöln class was launched in October 1918 by the German shipyard Blohm and Voss. The vessel had

On her way to Scapa Flow, she experienced some serious leaking, and in June 1919, she was scuttled in the same area in Scotland (Scapa Flow).

Today the ship lies on her starboard side 36m under the surface, although the shallowest point reaches 22m. The ship is in beautiful condition and is a fantastic example of a warship from the beginning of the 20th century.

One of the most popular diving locations is the wreck of the English-built ship SS Thistlegorm launched in 1940 and completed in 1941 as a marine navy ship. When it was decided that the ship would be serving as a warship, she was provided with a heavy caliber machine gun and an anti-aircraft gun. SS Thistlegorm found its crash during her fourth voyage in the area of the Red Sea in the so-called Safe Anchorage F. During this voyage, the ship was carrying important provisions for the troops in Africa, including

Unfortunately, on the warm and calm night of October 5th, 1941, a German plane released a couple of bombs targeting the 126m ship. The heavy load and ammunition exploded and separated the ship in two, and she quickly sunk after.

Today one of the pieces lays at 32m below the surface and the second piece at about 15m. The load carried onboard during WWII still remains there, exposing incredible pictures of the artifacts from that time.

When going further east, it seems like one of the most famous shipwrecks from WWII is Fujikawa Maru. This 133m cargo ship was built by the Japanese builder Mitsubishi in 1938. She was a famous ship offering luxurious accommodation for passengers and transportation of goods during voyages to North and South America and India. In 1940 the ship became the property of the Imperial Japanese Navy and was converted to an aircraft carrier to deliver planes to the Japanese war bases in the Pacific and the Indian Ocean. A torpedo first attacked it from an American submarine in September 1943. The ship survived and was fixed. A few months later, in January 1944, she got back into serving the Japanese Navy delivering planes. In February the same year, the ship was hit by torpedoes of the US submarines and bombarded by US planes. This time the ship couldn’t survive the attack and sunk in the area of Chuuk Lagoon not far from New Guinea.

Today there are still planes onboard the sunken ship, and it is one of the most incredible dives you could ever experience.

Another very intriguing wreck is the one of the 183m HMS Hermes, which was the first ship specially designed to carry aircraft for the British Royal Navy. Her construction started during WWI but was completed in 1919 – too late to be used for the war. Until the Second World War, HMS Hermes was used as a training ship and in a variety of missions. With the beginning of WWII, she got back to be used for what she was built – to carry aircraft. In the period of the war, HMS Hermes was based in Sri Lanka, where she got to the ocean debris in the spring of 1942. She was attacked by the Japanese air bombers, which sunk the ship in less than an hour together with more than 300 crew members. For many years the shipwreck was hard to be reached due to the political situation in Sri Lanka until 2009.

Today, it is easy to access the place in terms of political obstacles and offers underwater views of the first aircraft carrier!

And the last but not the least exciting shipwreck of the wars in our compilation is the 113m Japanese build passenger-cargo ship San Francisco Maru from 1919. The ship was initially used to carry cargo such as minerals; later, it was taken over by the Imperial Royal Navy to carry military cargo to the bases south of Japan. In May 1943, San Francisco Maru survived an attack and, after being repaired, got back to the area of Chuuk Lagoon. In late February 1944, the ship faced a massive attack by US air bombers which achieved sinking the ship which was carrying tanks, war trucks, airplane engines, guns, torpedoes, mines, and all sort of military equipment which remain on the bottom of the ocean together with the wreck of San Francisco Maru.

The shipwreck lies from 42 to 64m under the surface and is one of the most fascinating dives one can experience!

Without a doubt, shipwrecks create some of the most incredible underwater sceneries in our oceans. Reaching the depths where the war shipwrecks lie is like diving into history as if you have gone through a time machine bringing you back to the first half of the 20th century. Safe diving!