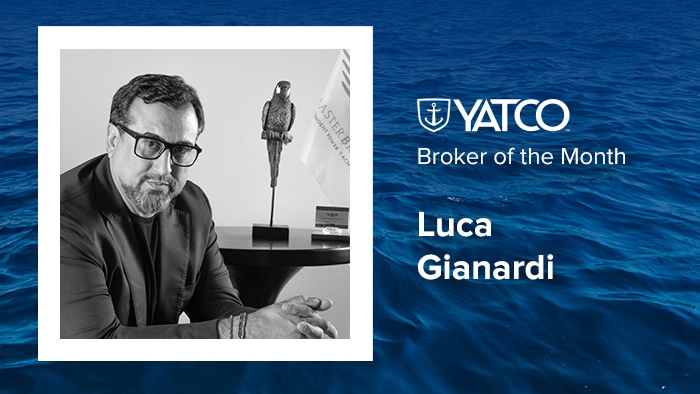 YATCO’s Broker of the Month series examines the influences and catalysts that brought these brokers into the wonderful world of yachting, who influenced them, and what they seek to change in the industry. Here, we interview Luca Gianardi of Master Brokerage.

Everything You Need to Know About YATCO’s Broker of the Month Luca Gianardi:

How did you get your start in yachting?

After having completed my studies I had the chance to get in contact with very prestigious fashion brands and a high-level clientele as a salesman. Professionals, entrepreneurs, managers… it was great to support such important clients in their choices, since they were often looking for their self-confidence through my combinations. This had allowed me to gain the trust of many people, to whom I was able to sell, additionally, business consulting packages. One of these clients of mine was a broker in the midst of his success, who proposed me to enter the world of yachting – it was the early 2000s: I was totally fascinated! I saw in yachting the excellence of what I really liked: design, luxury, art, glamour.

I had found a sector that I liked even more than fashion and so I attended an evening course at the National School of Transport, which allowed me to take the exam and enroll in the Register of Maritime Brokers.

During the same period of time, after many years I met again a classmate of mine who had accidentally taken the path of yachting as a technical designer and worked for one of the most important shipyards in the world. We fell in love and were determined not to be overwhelmed by events.

At that time a client, to whom I had sold 3 boats, proposed me to open a brokerage office in Viareggio with him: me and my wife moved here, and since then we have never stopped!

Is there anyone in particular who influences you – someone in the industry that you look up to, and why?

At the beginning of my career I had the great fortune to be alongside 2 great masters of Italian Brokerage: Maurizio Cozzani and Renato Consolaro … two personalities at the antipodes. Standing close to them, I realized that boats could be sold by following totally different paths, but whatever your style was, at the base there was the acquisition of the boat for sale! The important thing was to be determined, tireless and enthusiastic.

Both ran on two tracks that would have never met but – at the same time – both showed me how essential it is to be persevering in smiling and opening your arms to the customer!

In 2007, when I founded Master Brokerage, my point of reference was my partner … Stefano Riva, an industrialist from Milan who taught me that I would always have to do it alone when needing to gain money but, for all the rest, he was there! We were on the phone for hours while I was traveling and his stern voice gave me the confidence to face the customers.

He was a great lover of wooden boats such as the Akir, the Ghibli and the Baglietto: he kept his boats in Viareggio in front of the Port Authority and sitting in the cockpit of his boats he made me call customers to hear (as he said) how much bullshit I could say in a single phone call, then when he was tired of having me near, he would kick me off the boat, he would have a rest and I would go up to the office to finish what I had to do.

A great cigar smoker, he was a lover of engine rooms, he liked sitting in the bilge and forced me to observe how much mastery it took to make plumbing, electrical and mechanical systems coexist in such narrow environments. He always liked to take as an example the great ones of yachting from Viareggio such as Spreafico, Maestrelli, Iannetti, Guidetti, then – between a laugh and another – he sent me away telling me that I was a donkey.

His bearing and Milanese accent made him mercilessly equal to “the Honorable Knight Count Diego Catellani” (a character from the films of the Italian Fantozzi, Ed.)  which made him irresistibly likeable.

What do you enjoy most about the yachting industry – and what do you wish you could change?

Yachting in a way is like fashion, and cinema: these worlds envelop you totally…. There is no difference between work and vacation, you are always at work and at the same time you are always on vacation.

Yachting is a beautiful environment to work in, because you are in contact with the excellence of all sectors: construction technique, new technologies, design, art, jewelry, fashion, cuisine…

Whoever buys a boat, any boat, is a man who has been successful in his life and has been able to reward himself: it seems trivial but it is not. I strongly believe that being able to reward oneself by benefiting one’s family and close people means giving life to virtuous circles that lead you to have close relationships and to know other people who have been successful from whom you can take an example and draw inspiration.

Tell us about your greatest accomplishment.

My biggest success was the sale of my first boat: it didn’t seem real! I was walking on air!

I was a 21-meter Jongert whose owner was a well-known TV presenter: everything was perfect and, above all, went smoothly from start to finish.

The buyer was very much in love with this boat and I had made a nice friendship with the seller, a man from Milan, nice and a great expert of the of human psychology mechanisms. As an investment he had opened a beautiful restaurant in Porto Rotondo with they served delicious food.

The sale of this boat was breaking the ice in the true sense of the word: I recalled when I first stepped into the ring. From then on, I felt different, satisfied.

Since that first sale, this little miracle continues and repeats itself every time I close a sale: it is an all-encompassing fulfillment … I think it can be associated with the feeling of when a player scores a goal.

Until the end of the sale you never know if you can succeed, and you have to stay focused – body and soul – on the negotiation: it often happens to me that at the end of the sea trials preparatory to the sale, my mother asks me if I spent a nice day at sea and I don’t even remember if we were in the South or in the North if it was sunny or cloudy … in the hours of the test I am totally absorbed in feeling of the vibrations, the noises, the smells and listening to the comments of those who have to judge the outcome of the performance, and I really do not remember anything else.

That’s how it is, it’s part of the sales process. It’s the same thing as when I’m at the restaurant with customers: I get up from the table satisfied and smiling but if someone asks me what I have just eaten, I never remember anything: the beauty of yachting.

What are some of the challenges you come across at work, and how do you approach them?

The most important challenge I face is my every morning choice. The broker’s hardest job is choosing who to give credit to, who to follow, which boat to visit and especially who not to give credit: I’ve always avoided unclear situations and this paid me a lot!

All Brokers in our Broker of the Month Series: