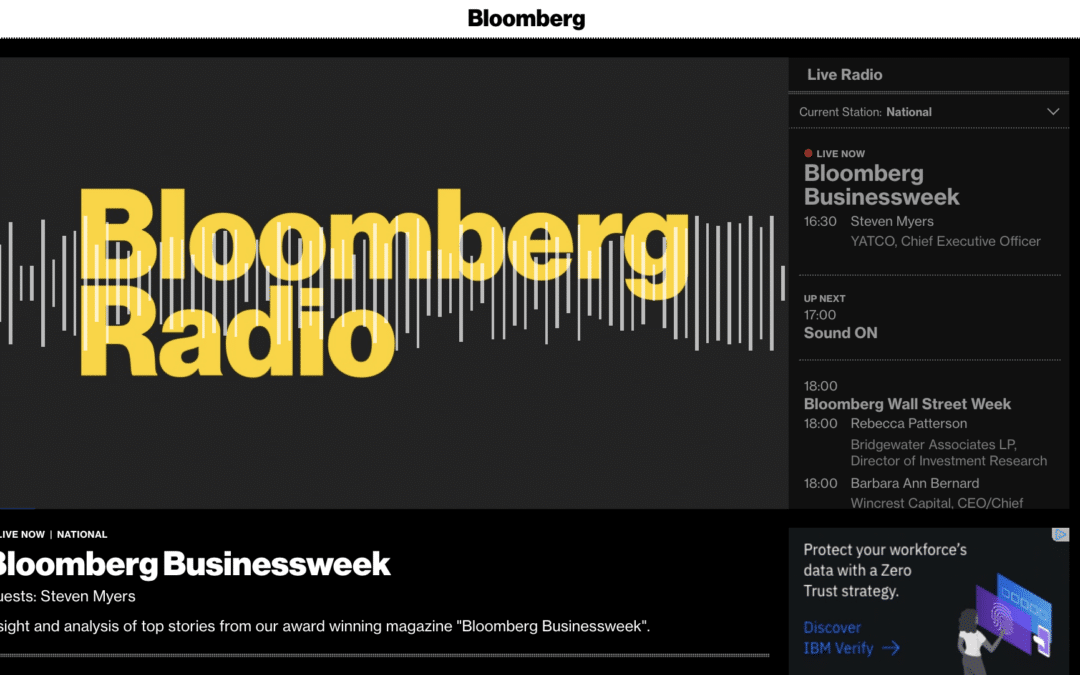 Joining Bloomberg Businessweek direct from Miami was Steven Myers, CEO and Founder of YATCO who was interviewed by Carol Massar and Tim Stenovec on how the billionaire economy is booming with the demand for superyachts.

Increase of 60 Percent of Superyachts Sold in 2021

Opening the interview with an astounding statistic, Bloomberg announced that the number of superyachts sold this year alone increased by about 60 percent, and more than a quarter of purchases were for new vessels.

When asked what he had been seeing in terms of activity, specifically during the pandemic, Steve replied,

“I have been in the industry for the last 30 years, and we have never seen anything like this. It far surpasses 2007, in the boom there. It’s a very cyclical industry, however, it’s been very solid; the trends have just been upwards. The challenge that we now face is inventory. The pre-owned inventory dried up after 2020; there was a rush to inventory during COVID. Obviously, people wanted to isolate themselves and there’s no better place to be than on a boat or a yacht. And that trend is going to continue; the new boat sector in 2021 has absolutely been on fire, as well as the luxury yacht charter business.”

They then asked what he is seeing from yacht builders about how they’re able to meet demand or how wait times have changed due to this unprecedented demand. He replied that he thinks there’s a trend more toward less customization and more toward production yachts because it’s a faster production time. He then said, “But, certainly, the custom projects are continuing, and as we get into the half-billion-dollar plus yacht market, there’s certainly a significant lead time, but right now, most of the semi-custom/custom builders are looking at being sold out for the next five years until they find additional capacity.”

Bloomberg also asked about access to supplies, such as teak and other necessities to build, are the builders able to get everything they need? Steve said that it’s a challenge, but he thinks the industry is able to meet those challenges because we are not looking at the volume of the housing market, for instance. It’s not holding them back to the extent of other industries.

What about when it comes to resales, they asked? Steve said the problem here is lack of inventory.

“People are willing to sell, but if someone were looking to sell for 12 million, it might be 14 million now. We have actually seen 59 price increases on YATCO.com just in the past month, which is unheard of. Normally, a price increase in yachting is an anomaly, and it usually doesn’t send a good signal to the market but for the first time in my career, we are seeing an extraordinary number of price increases on a regular basis.”

Regarding crew, they asked, how do you find people to work on these boats now because we see a labor shortage happening in many different industries but if you are lucky enough to be one of those people to get your hands on one of these yachts, how hard is it to get a crew? Steve replied that the availability is there.

“The usual channels to go through are professional crew agencies. There’s a good pipeline. The big difference in the yachting industry is what is attracting people to their boats is the fact that it’s a secure environment where you can control and define boundaries and making sure that everybody is vaccinated onboard. We are seeing people with spouses that aren’t even so interested in the boating program, and suddenly are now spending majority of their time onboard, and spending less time at home, going to further remote locations like Antarctica, and Norway, for example. But, the crew are there and we are not seeing a major problem in that respect.”

Bloomberg then stated that YATCO.com has a fair amount of boats listed, and to that, Steve replied that although the company has a fair amount of yachts listed on the site, inventory is still down overall. At any given time, YATCO typically has over 10,000 exclusive central listings for sale, and at the moment “we are probably seeing a 40 percent decrease in actual volume of availability of yachts for sale, so it is significantly down. But I think within the next 12 months, we’ll start to see more inventory increasing as the new boat availability comes back and start cycling again.”

Who is the Yacht Buyer?

Bloomberg then stated that they are curious – who’s buying? Steve said, “We are seeing a big increase of new, 20 to 30-year-olds coming into the market from tech; a lot of them are starting off chartering.” Then they asked about price range, and what can be considered entry level, and Steven said, “we have boats that start from tenders to yachts, so you could be looking at anything as small as a 10,000-dollar tender, all the way up to close to half a billion-dollar range. “At any given time, there’s 250 million to 350 million-dollar vessels for sale and I wouldn’t be surprised if we see within this decade the first billion-dollar yacht. Particularly as the world is changing with COVID and this ongoing pandemic, I think we’re definitely seeing people spend more and more time onboard, and I think that’s going to continue. With most billionaires, their yacht is worth more than their home and I think that trend is going to continue. They’re seeing more and more value being onboard. One of the things that happened during the pandemic is that people took a breather and said, ‘life is short’ and I better get the most of it now. They’re spending more quality time with family and friends onboard and exploring the world.”

Geographically, what is Steve seeing in terms of buying trends, they ask, and he replied, “One interesting thing about Europe, is that it’s turning very green. We are seeing a lot of pressure on builders to go green, lower emissions, employ hybrid technology and the use of recycled materials. There’s also some pressure on marinas for more green services. Hopefully, that trend will continue worldwide, but it’s starting aggressively in Europe and I think it’s about to expand. “At YATCO, we are about to take some initiatives to push the green trend. Yachtsmen and women definitely appreciate the water and environment if not more than anyone and I am very impressed with the direction the industry is going. We’re certainly going to try to lead the way to bringing more people onboard with going green and being more environmentally aware and conscience.”

Bloomberg then asked what could possibly derail the industry from moving at such a pace as it has been now? And Steve replied that he doesn’t see it slowing down anytime soon. “Since 2008, we’ve seen growth continue and that trend will prevail.”

Take a few minutes to listen to the interview in full, here: https://www.bloomberg.com/news/audio/2021-12-06/luxury-spending-on-lamborghinis-and-superyachts-podcast