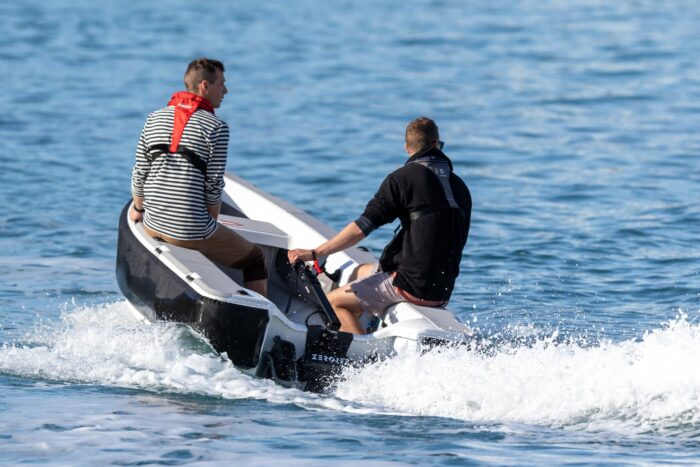 Electric power is making its presence felt in the marine industry, with new electric tenders from New Zealand changing what we’ve come to expect from e-performance.

Entering the jet propulsion world as creators of high-performance electric jetboards, the brains behind ZeroJet watched the e-propulsion space and identified a need in the market from boatbuilders, for an effective electric propulsion system.

Having created powerful technology which paired a bespoke jet pump with an electric motor,
ZeroJet had a high-performing prototype which quickly drew the interest of boatbuilders. Development of the world’s lightest electric jet tender quickly followed in partnership with fellow Kiwi company Offshore Cruising Tenders, as well as the build of a highly-efficient system for three to four metre tenders.

An ultra-light performance jet tender is now available through ZeroJet’s and Offshore Cruising Tenders at 129kgs in carbon with a small battery pack, going up to a heavier model at 189kgs; the OC350 with 10kWh packs. ZeroJet’s system has been designed to provide optimum performance on tenders up to four metres, and the team is now working on a larger system suitable for tenders up to five metres due to high customer demand.

Bringing efficiency and fun to the electric market

The team at ZeroJet had watched various e-propulsion tenders hit the market and identified the issues present in first generation electric tenders – heavy outboards that outweighed performance, or small engines and lacklustre power – and were determined to create an e-tender that was enjoyable and effective to run.

The result the Auckland-based team has produced has all the benefits of jet propulsion – no exposed propeller, precise steering controls, easily-manoeuvrable across shallow reef ecosystems and beaches, and simple to lift on and off deck – as well as delivering an electric solution that finally serves up high-performance, is fun to drive and easily gets the tender onto the plane.

It represents the evolution of electric power. From the hit and miss first iterations initially brought to market by companies around the world, ZeroJet has presented an impeccably-researched, fully-functional, best-in-class solution that provides the performance to present a strong alternative to its combustion cousins.

Supplied as a finished electric tender or custom solution

ZeroJet has been designed to be supplied as an OEM solution, as well as a custom solution for individual tenders, with the Auckland-based company saying the majority of its products are sought out by customers across Europe and the US.

The jet systems are designed and tuned for an electric motor to ensure excellent performance. Specifically created to work with tenders as small as three metres, the compact and lightweight system removes the issues associated with traditional and heavy combustion engines.

The electric jet system is offered as a turnkey solution, 48V, the equivalent to 20 HP and weighing only 30 kg. Though high performance, the system is low voltage to ensure safety for the user and ZeroJet has partnered with batter supplier Super B to use the safest type of cell chemistry available – LiFePO4 – which won’t catch fire even if punctured. The ZeroJet system comes in waterproof housing with an electric motor, intake grate, and high efficiency jet pump, as well as the ability for the team to fully-customise a system for larger tenders. A 40 HP equivalent turnkey solution will also be available in 2022.

As well as the partnership with Offshore Cruising Tenders, ZeroJet technology will also soon be available in a finished tender through a leading RIB manufacturer.

“It’s quiet, maintenance-free, and tons of fun to drive. Not having an outboard to haul up for beach landings or worry about in shallow water is mind-blowing. You’ve got to try one of these.”

About the Author Bex Rempel

Bex Rempel is the CEO and co-founder at ZeroJet, an innovative startup company working on solving a massive pollution problem in the marine industry.  ZeroJet partner with boat builders to provide a turnkey electric jet propulsion system for boats and has a goal to replace 10,000 combustion outboards within 5 years.

Bex is a Chartered Accountant and has been working on growing various start-ups in the marine space over the past 7 years.