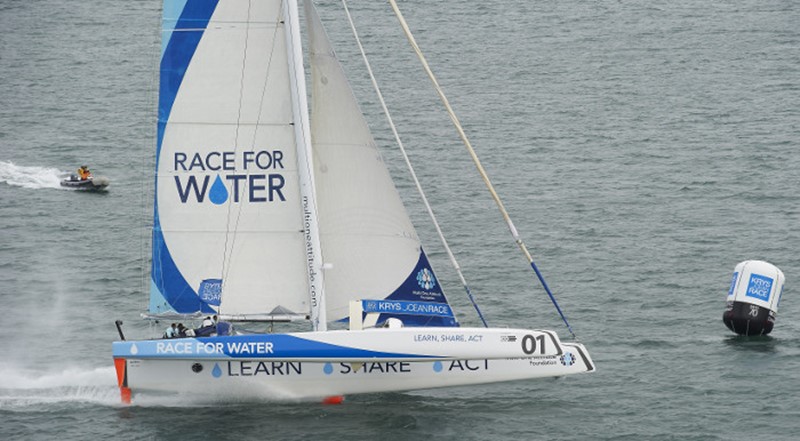 The 2011 69' 7" CDK MOD 70 Racing Sailboat Trimaran RACE FOR WATER is a sail yacht for sale located in Lorient, France.

The MOD 70 class is born in 2009 with the experience gained in the Orma 60 trimaran class, from an association between 3 passionate entrepreneurs & sailors: Marco Simeoni, Steve Ravussin and Franck David.
At the start of the Vendee Glove race 2008, Steve Ravussin and Franck David, introduce to Marco Simeoni the Multi One Design project which is to set a class of offshore identical trimarans. This concept to have international renown skippers with equal potential to race around the world, seduced the Swiss businessman Marco Simeoni who signed an order for 5 MOD 70; to start the Multi One Design story.
In 2009 the company Multi One Design is created in Lausanne (Switzerland) at the same time as the Race for Water foundation in order to inform, share views and act on water issues worldwide and oceans protection.
Race for Water foundation associated with the first MOD 70 to be built.
In total 7 teams of 3 different nationalities were engaged to race on the MOD 70 including Michel Desjoyeaux on Foncia, Roland Jourdain on Veolia Environnement, Sidney Gavignet on Oman Sails, Yann Guichard on Spindrift Racing and Jean-Pierre Dick on Paprec Virbac.
Compared to the Orma 60, the MOD 70 have the following improvements:
• 5% reduced sail area for better safety
• Main hull 10 feet longer for avowing pitch haul
• Raised beams for better passage in the waves
• Lifting main rudder
• Curved foils for better performance et safety
• Canting mast positioned further aft