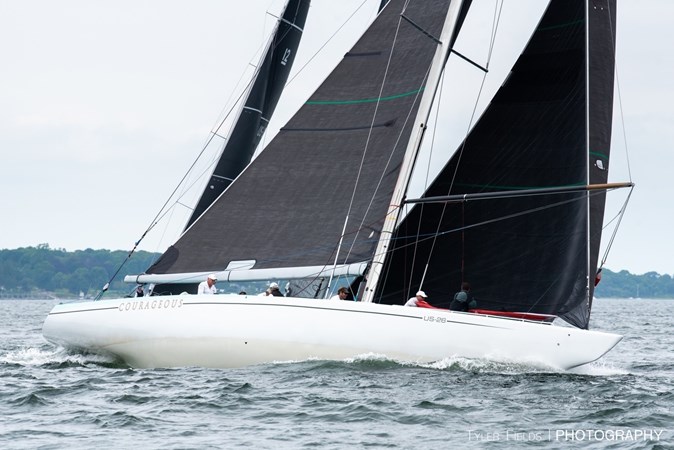 The 1974 65' 8" INTERNATIONAL 12 Metre Racing Sailboat Courageous- US 26 is a sail yacht for sale located in Portsmouth, Rhode Island, USA.

Perhaps the most famous and revered 12-Metre of the modern era, Courageous won the America's Cup twice, in 1974 and 1977 and is one of only three boats with that distinction in the 169 history of the competition.  An icon of American sailing, she is notable also as the first 12 Metre of aluminum construction.

Many stories have been written and told of those Cup wins, particularly the close relationship enjoyed by Ted Turner and Gary Jobson leading to their victories.  Derring-do on the water, serious debriefing, a sharp focus on sail shape and above all a ‘team-effort’ remains the Courageous Legacy - along with those two Auld Mugs, of course

In 1997 she was donated to the Museum of Yachting in Newport which was later incorporated into the International Yacht Restoration School, her current owner.  In honor of her sailing provenance, she was designated Rhode Island's State yacht at the time of donation. Thoughtfully restored to her magnificent originality, Courageous has been under a syndicated ownership and raced competitively since.

In her 1977 configuration, Courageous was known as an ‘easy’ boat to sail and considered ‘slippery’ off the wind.  Although credit was given to the spinnakers designed by Robbie Doyle who has been heading up the sail design program since 1974, he demurs: “she has always been fast downwind”.

While maintaining that advantage other design changes compromised her performance on the wind and while well sailed, she was no longer at the ‘pointy end’ of the fleet.  An earlier keel modification changed her balance.  Fortunately, the development of Computational Fluid Dynamics providing empirical analysis came to the rescue.

In preparation for the 2019 Twelve Metre World Championships the hull was laser-scanned and digitized for the purposes of design optimization.  An extensive CFD study conducted by Tyler Doyle resulted in a new rudder design by Tyler, Robbie Doyle and Jim Taylor Design (initially involved with her in 1977).  Continuing extensive studies resulted in a new trim tab being designed and engineered by the same triumvirate.   The end result eliminated her recent temperamental tendencies and Courageous is far better balanced and once again “easy to sail”

A mechanical issue prevented full utilization of the trim-tab during the World Championships, where she placed 3rd in the standings.  Finally, the design changes were proven at the North American Championships where she won five out of six races.  A fitting finale` for her long-time crew and syndicated stewardship.

Courageous is in the finest and fastest condition of her life.  With her modern mast, upgrades in 2019 of her sail-wardrobe, Harken winch package and running rigging upgrades ‘the list’ is confined to a  ‘scratch and spray’ of the top-sides, preparation and fresh paint on deck.  The International Yacht Restoration School in Newport RI has her housed in a clean, expansive boat shed in Portsmouth, RI.   She is ready for commissioning.

Contact the yacht broker to receive more information or schedule a showing of this 1974 65' 8" INTERNATIONAL 12 Metre Racing Sailboat Courageous- US 26 yacht for sale in Portsmouth, Rhode Island, USA today!

All sails by Doyle