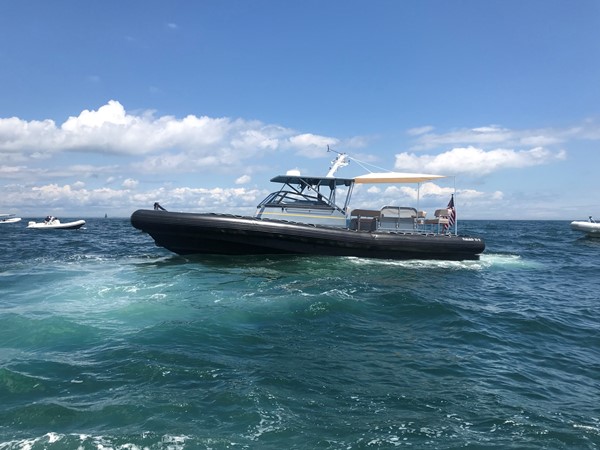 The 2007 40' NAIAD Jet Boat Boats Ragnar is a boat for sale located in Portsmouth RI, Rhode Island, United States. Ragnar is a hard bottom inflatable built of aluminum in 2007 as a tender and tow vessel to a 12 Metre sailing yacht.   Powered by twin Cummins QSC-8.3 540 HP engines she is capable of running in excess of 40 knots with Joystick and mouse controls.  Her tube system is of 'military-spec' polyurethane.  Twin chairs at the helm station with removable seating for ten on the engine hatch and aft deck.  Accommodations include one berth and fully enclosed head with electric flush; fresh or raw water in to the holding tank.

In 2018 annual maintenance was carried out on the Cummins engines and Hamilton Jet Drives. New alternators were installed along with a newly wired charging system.  Trilux bottom paint was applied.

Summer of 2019.  Service carried out on Hamilton Jet Drives, anti-foul paint touched up.