This vessel is dramatically changed from its original configuration. It has undergone a major deck rebuild, cosmetic and system upgrades, and extensive customization. The highest quality materials, components, and systems are installed. It can virtually be considered a new vessel from 2010 when it underwent its major rebuild.

The teak deck was removed; teak toe-rail removed; all deck hardware was removed: cleats, stemhead fitting, chainplates, stanchions, bow and stern rails, windlass, winches, turning blocks, vents, hatches, etc. The teak standoff blocks and Genoa tracks were removed. Portions of the deck that showed high moisture content were removed, the core dug-out and replaced with non-absorbant Coosa board (FRP) structural material. In some areas, solid resin was used. G-10 epoxy/ fiberglass composite material was used as a structural core for all standoff blocks, winch bases, the mast partner, and every place where teak had been formerly used. A new Goiot anodized aluminum toe-rail system was installed and thru-bolted, complete with stanchions attached to the rail and fairleads in the rail. Custom toe-rail bases were made where bow, stern and gate attachments to the toe rail were other than vertical. These pieces were cut from blocks of aluminum and powder coated. New uncoated 5/16" stainless steel lifelines were installed. Six new stainless steel fold-up cleats were cut into the deck, eliminating foot traps. Forward deck anchor locker lids were made and installed. A stainless steel chain skid plate was installed between the stemhead fitting and the windlass to avoid scratching the lids. The windlass was rebuilt and new electrical lines run. The location of the windlass switch and breaker were moved to a higher location at the chart table area. A new stainless steel washdown hose bib was installed in the chain locker. New electrical lines were run to the pump for the washdown system. New polished stainless steel hatches with smoked Lexan skylights were installed. New Lexan windows and custom made polished stainless steel surrounds were installed and thru-bolted. New stainless steel portlights were installed. All deck hardware had new, thicker, stainless steel backing plates installed and were all thru-bolted. The companionway hatch cover is made of Lexan, replacing the original teak cover, with new stainless steel and Delrin slides. Cockpit locker lids were extensively repaired and new hinges and hold-downs were added. The propane locker did not have a drain to the outside and this was added, along with a secure tie-down system. For 2019 the rudder skeg was rebuilt and strengthened and a new suite of electronics has been installed.

A folding, stern-mounted polished stainless steel boarding ladder was custom manufactured and forms the center portion of the stern rail system. Running lights were replaced with Lopolight LED lights-- even the masthead tri-color is a Lopolight LED. A new masthead strobe light with a custom mount was added. The mast was rewired with plugs added for lights and radar at its base. New running rigging was installed in the mast. All shroud ends and turnbuckles were die tested for cracks. Custom stainless steel surrounds for the chainplate deck connection were manufactured and installed...these are substantially larger than the originals. A new Kevlar mainsail and 110% headsail were added. The staysail attachment point in the forward deck was carried thru the deck with a stainless steel rod and bolted and secured thru the stem and glassed over. New Morse engine control cables were installed and the binnacle was rebuilt and refinished and appears as new.

The bottom was ground down to raw glass and three coats of Interlux Inter-Protect were applied, followed by four coats of antifouling paint. The topsides were extensively faired and Awlgrip applied. The deck, when stripped and repaired, was painted the base color. The hardware was then fitted and bolted down, and then the deck non-skid was applied. A new dodger of Sunbrella material in the color "toast" was made with matching covers for the windlass, the helm wheel, and the instruments in the new pedestal pod.

The interior was rewired with new Imtra "Hatteras" LED lights installed with white and red options. A second battery bank was added to the port side and the existing below the cabin sole battery bank was removed. The starboard side battery bank remains. Four new group 31 (two house banks) and one group 29 AMG (engine starting) batteries were added. An auxiliary second tier double bilge pump system was added with its own overboard discharge system. A diesel-powered Espar heating system was added with outlets into the navigation station area, the main saloon, and the head. New instruments were added at the helm and navigation station centered around the Garmin ethernet network and the Garmin GPS map 7610 & 7612 multi-function displays; Garmin GMI 10 wind instrument at the helm with speed, depth, and temperature displays; Garmin Fantom 24" radome on the mast. These instruments are tied into a Garmin hub that allows the two multi-function displays to share information. A second station RAM mike was added to the helm. All the wiring of the boat as well as the heater was done by Robert Kramp a qualified marine electrician with additional marine electronics installation by John Arrison of Shearwater Yacht Systems. There is a new valise style ocean life raft. The 406 ACR EPIRB was new in 2006 and is registered to this boat. Flares are extensive and current. Ground tackle consists of a Rocna 44# anchor with 40 feet of 5/16" G-40 chain and 200 feet of 5/8" nylon braid. The secondary anchor is a Fortress model 23 with 40 feet of 5/16" G-40 chain and 200' of 5/8" braided nylon line. A new 1/4" plate stainless steel custom chain stopper attaches securely to the stemhead fitting. The shore power attachment and internal hookup were rewired by Robert Kramp and brought up to 2010 ABYC E-11 standards, along with extensive electrical upgrades. There is a new battery switch for the new bank, a new cut-in switch allowing all batteries to be used to start the engine. A new stainless steel black water tank was installed with new hoses. There are new cockpit cushions and all new cushions for the interior. A new headliner was manufactured and installed. The sole is newly varnished. A grabrail was added at the companionway to more easily access the chart table area. A new Force 10 LPG stove w/oven was installed on gimbals at the galley. New polished stainless steel handrails on deck were fabricated and replaced original teak handrails. These are thru-bolted and backed with heavy fender washers. New bearings were installed in the existing traveler which was refinished and modified. The Genoa tracks on deck were cleaned-up and Awlgripped black." ~ Kent Thurston Survey dated August 14, 2019

Quarter Berth: Stepping down the companionway steps you enter the main cabin, outboard to port and just aft of the navigation station is the quarter berth that features:

Main Salon: The salon of Red Jacket V is traditional satin finished teak and white interior. The white laminate headliner with teak support accents makes the interior feel open and airy. The U-shaped dinette tabletop is located on port and drops down to make a 79” x 45” berth. The settee on starboard converts to a 6’3” x 27” berth and has a  large locker cabinet forward. Headroom in here is 6’5”. This area also features:

Forward Cabin and Head:  Just forward of the salon is the owner’s cabin with ensuite head:

Galley:   Moving aft and to starboard you enter the well thought out L-shaped galley with:

"Fiberglass Reinforced Plastic (FRP), hand-laid in a female mold, using a very heavy layup schedule and a large number of sizeable glassed-in wooden stringers, floors, and frames The exterior below the waterline was ground down to clear FRP, then coated with Interlux Epiglass epoxy and built up to the original hull thickness. Then, three coats of Interlux Inter-Protect barrier coat were applied and faired-in, and Awlgrip primer and Awlgrip exterior finishes were applied" ~ Kent Thurston Survey dated August 14, 2019

"The deck was completely rebuilt and refinished in 2010, including any moist or questionable core material. Coosa fiberglass strand composition board (which will not deteriorate) and/or solid epoxy was used to replace the core material that was removed. A new deck surface was laminated, faired, and primed. The deck was then sprayed with multiple coats of white Awlgrip with non-skid areas applied over this in a contrasting beige Awlgrip. There were many modifications made to the deck surfaces, including new anchor locker hatches fabricated, the companionway was widened and re-designed, G-10 was used to replace all areas where teak had formerly been used as a core stiffener, including all winch bases and mast partners." ~ Kent Thurston Survey dated August 14, 2019

"Custom fabricated stainless steel chain stopper that has been designed specifically for RED JACKET V's anchoring needs. This is secured to the anchor roller, relieving pressure on the windlass. Nylon braid rode can be secured on the foredeck's custom mooring bitt."  ~ Kent Thurston Survey dated August 14, 2019 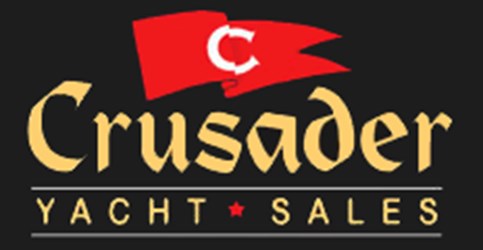