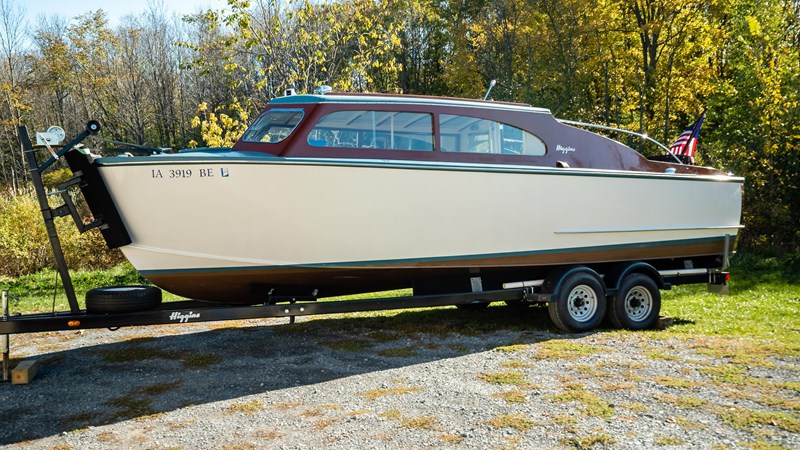 History of the Vessel

Andrew Jackson Higgins is best known for his Military Landing Craft that were highly recognized for their success in WWII.

The company's craft were expertely designed to land higher up on beaches and retreat at a higher rate of speed than any other vessel at the time. After the war, the company began to produce recreational boats, which were a variety of sporty runabouts, utilities, and cruisers.

The Andrew J is the last known surviving example of the Deluxe Sedan Cruiser model. She was built in 1948 and features a fully enclosed wheelhouse, bunks that can also be dropped for additional seating, and a large open aft deck for entertaining.

She has been restored to Concours quality and is a multiple award winner. Over $100K invested into the restoration. Complete with a custom trailer suitable to haul it anywhere. A fine example worthy of adding to your permanent collection!

This 1948 Higgins Deluxe Sedan is in great condition, and she was shown in a judged show, she scored a 99.5 in the Preserved Category and won Best of Show Preserved. (ACBS International Show Racine, WI).

A very rare boat and the only 1948 26' Higgins Deluxe Sedan Cruiser that we know of. She was restored by Nelson Boatworks to the exact factory specifications. Over $100K invested in the restoration.

Easy to tow and a comfortable ride on her custom built trailer. To gain more context on her superb restoration and comments from others, there is an article named "The Andrew J" written by Texx from WoodyBoater.

A fine example of Andrew Jackson Higgins' craftsmanship, a builder renowned for its efforts during WWII with the production of its famous landing craft and PT boats.

Year: 2006 Manufacturer: Yacht Club Axles: 2 Capacity: 7500 lbs Brakes: Surge Comments: Custom made for The Andrew J and fitted. I use my Ford F150 V6 Turbo to pull her and cruise nicely at 65 mph.

Boat Cover: Yes Stereo: No Tonneau: No Spotlight: No Side Curtain: No Convertible Top: No Fume Detector: No Fire Extinguisher: Yes