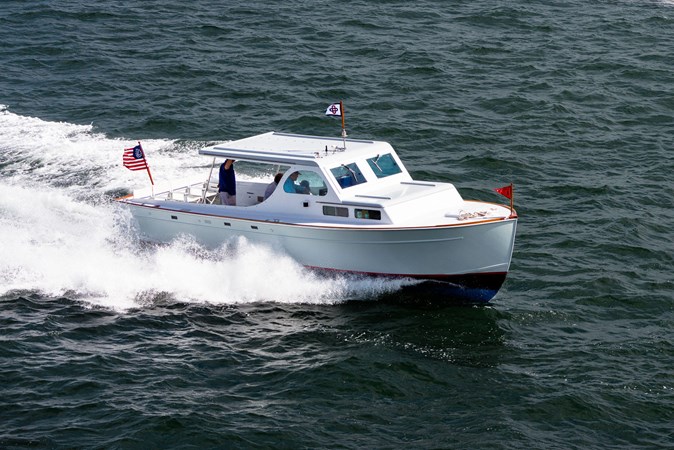 Mahubas has been under the current ownership since 1989.  During those thirty years she has been used primarily as a picnic boat on Narragansett Bay.  Her Mercruiser engines with 329 hours running time, were installed in 2017.  Mahubas has been used primarily for harbor cruises (almost 75% under 1,500 rpm; cruise speed/top speed 18/28 knots.  She has been a spectator vessel at all the major 12 Metre racing events sailed off Newport and in 2001 she accompanied Courageous on the Grand Tour of 12 Metre events in Cowes for the America's Cup 150th Jubilee.

To quote from the original Huckins Yacht brochure on her Quadraconic Hull; "She comes up quietly onto a plane at 8 knots and has a running angle of 2 1/2 degrees at cruising speed.  Because of her lightweight construction and efficient hull form she is the most fuel efficient yacht that you can ever ride on. She is as nimble as a ballet dancer yet designed to take any sea that you can throw at her.  She is exceptionally quiet at all speeds and economical tp rim burning approximately 14 gallons per hour at 20 knots.

The owners have ensured the Historical Value has been maintained in keeping with her history.  No expense or effort has been spared on attention to detail on any project undertaken.  In the words of the surveyor Norman Le Blanc; "This vessel meets all the qualifications and definition of a great Antique and Classic vessel's true provenance....Mahubas has a documented, traceable and authenticated build history, dating all the way bay to 1953.  This easily translates into Historical value."