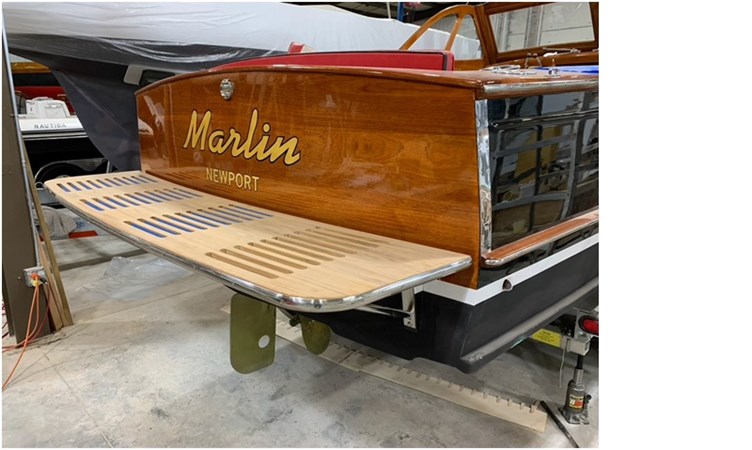 Runabout restored to "as new" condition

MARLIN is a 1959 runabout built in a traditional plank on frame construction with cedar planking over mahogany sawn frames. An engine upgrade was performed in the late 1960 to a small block Chrysler Marine 440 B/RB engine (“Crusader”). The engine was removed during a 2019 refit and completely rebuild.

MARLIN is an open cockpit runabout with a small cuddy cabin forward and a flush fore deck, laid in teak. Superstructure is built from mahogany and remains in perfect condition to this day including the original hardware.

At some point in her life MARLIN’s hull was upgraded to a bi-axial glass sheeting with perfect fairing and features a flawless high gloss AwlCraft paint job which was renewed during the 2019 refit as well.

During an 18-month extensive refit this rare Forest Johnson Prowler was brought back to current ABYC standards, all electrical systems were upgraded and/or replaced, the engine was rebuilt, a custom designed and fabricate swim platform was added, the open cockpit layout was upgraded to additional rear seating, a marine head was added, all bright mahogany was stripped, faired, stained and newly varnished.

MARLIN comes with a custom-built twin axle Continental trailer. The trailer was refurbished in early 2019 with all new brakes and wiring.