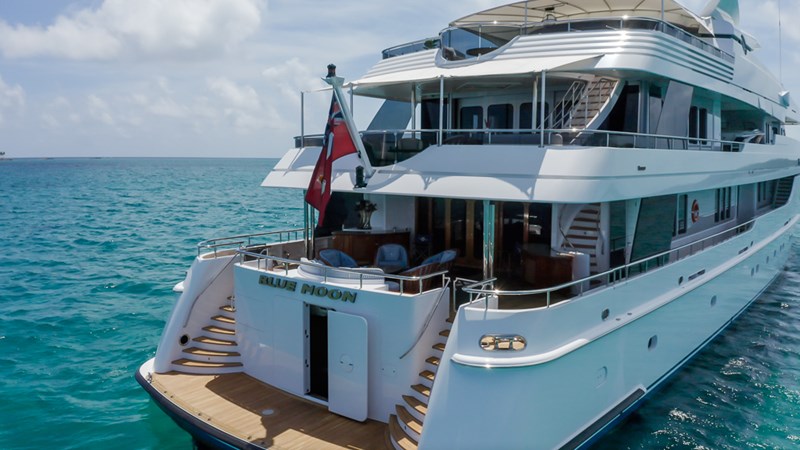 2005 198’ Feadship built at the Royal Van Lent Shipyard (Yard #793, delivered June 4, 2005) and naval architecture by De Voogt Naval Architects.  Exterior styling and interior design by Donald Starkey and Lee Perot.  She has a displacement hull, constructed of steel with an aluminum superstructure and is built to Lloyds Class (Class notation: 100 A1, SSC,Yacht (P), Mono, G6, LMC, SCM) with MCA compliance.

Number of Guests: 12
Number of Cabins: 6
Gymnasium: one for guests on lower level and one for owner in the Master.
Elevator: 4 station hydraulic elevator from lower deck to sundeck, rated for 350Kg.  Capable of fitting a small wheelchair.

Owner’s Suite
Master stateroom is on deck with 1,200 square feet of Owner’s Suite, including a separate large Owner’s office to starboard and Owner’s gymnasium/spa to port.  This is a much larger than the average Owner’s suite with private/separate access to all three rooms which have their own en-suite bathrooms.  Large, windows allow maximum light and visibility to the sea.

This extremely flexible design provides for the option to combine four of these guest staterooms to create two large VIP suites, each with a sitting room and separate his and her bathroom. As such, on the Guest Level, you have the choice of a five, four, or three stateroom layout. Options:

Main Salon
The main salon is accessed from the aft deck via automated doors and is surrounded on all sides by massive windows.   Separated by a small buffet cabinet from the formal dining area, the beautiful wood clad room is a perfect place to greet guests or have a relaxed conversation.  Just forward of the main salon is the primary guest entry foyer with a separate formal entrance to starboard.  From this area, you can proceed forward to the master stateroom, up to the skylounge or down to the guest staterooms via a beautiful circular stairway or spacious 4 level elevator.