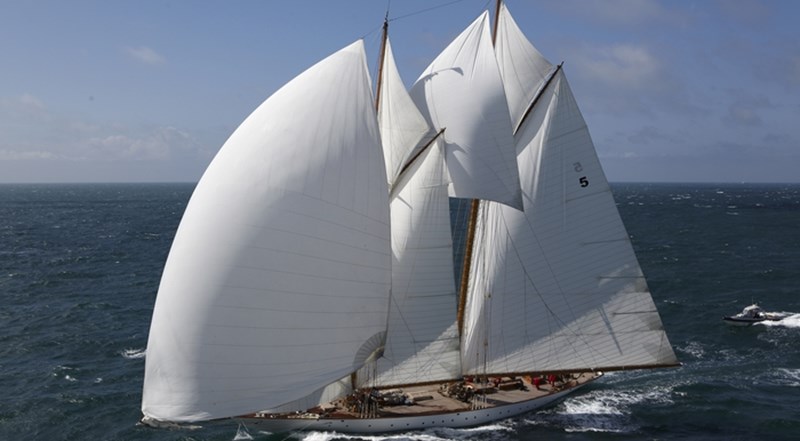 Eleonora is an exact replica of the schooner Westward. Westward was launched on March 31 1910, as hull number 692 at the Herreshoff Manufacturing Co. in Bristol, RI, USA. She was then arguably one of the most famous and best known racing schooners in the world.

Steel hull with teak superstructure, Eleonora is an exact replica of the schooner Westward. Westward was launched on March 31, 1910, as hull number 692 at the Herreshoff Manufacturing Co. in Bristol, RI, USA. She was then arguably one of the most famous and best-known racing schooners in the world. She was designed by Nathanael Greene Herreshoff, the ‘Wizard of Bristol’, the designer of the America’s Cup defenders which turned back all six challenges from 1893 to 1920. Westward was undoubtedly the fastest schooner in the world in 1910 and following years.

With Captain Charlie Barr, who was one of the finest racing skippers in the world at her helm, she sailed successfully against racing yachts such as Britannia, Lulworth, Meteor II, and won numerous trophies. For thirty-seven years, Westward graced the yachting scene and represented all that was best in yacht design and workmanship.

ELEONORA not only follows Westward's heritage of big schooners racing but also, with her comfort and space, offers an unforgettable cruising and relaxation experience. She was built at the Van der Graaf shipyard in Holland and was launched in March 2000. Since then, she has successfully participated in a number of classic sailing regattas and hosted a number of high-profile guests on board during her charter activities.

ELEONORA shows astonishing beauty under sail, her slender hull cutting a pathway through the sea in an elegant combination of beauty and power. Over one hundred years after the launch of Westward, we are again able to appreciate the awesome majesty and grandeur of this superb classic sailing yacht underway, sails filled as she surges forward, her white wake streaming behind.

With no sacrifice to luxurious standards of comfort, her staterooms and the entire interior display the ambience and elegance of another age.

Best features:
• Exact replica of Westward, one of the most famous racing schooner in the world
• Successful on the charter market and in the classic sailing regattas
• Extremely well maintained: several refits between 2008, 2018, 2019 & 2020
• B.V. - MCA Compliant & Commercially Registered (Unlimited Operation) 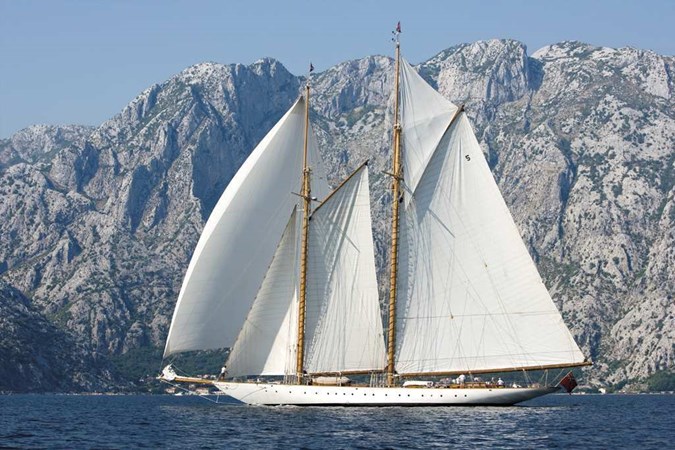 ELEONORA has been and is still extremely well maintained

Master Cabin Aft
This spacious and airy stateroom is accessed from the companionway entrance and runs the full width of the yachts beam. It is well illuminated by portholes and a large skylight. There is a large king size bed, fitted wardrobes, drawers, a dressing table and seating area with an office desk. The adjoining luxurious bathroom includes a marble topped bathtub, shower, twin basins and toilet.

Twin Guest Cabin on starboard
Situated amidships with access from the companionway, it has two single berths, a wardrobe, drawers under the bunks, a bedside cabinet with a glass fronted bookcase above and a desk. The en-suite bathroom has a shower, basin and toilet.

Double Guest Cabin on port forward
This second stateroom is lavishly appointed with its own sitting area and table. The large comfortable queen size bed has numerous drawers and stowage below. There is a large bureau writing desk with a glass fronted bookcase above, a set of drawers, a wardrobe and an en-suite bathroom with shower, basin and toilet.

Double Guest Cabin on port aft
Accessed from the main companionway, this spacious cabin with a queen size bed has also an en-suite bathroom with a shower, basin and toilet. It is well equipped with a writing desk, a with glass fronted bookcase above, a full-length wardrobe, a hanging closet and drawers.

Saloon
This magnificent traditionally panelled saloon spans the full beam of the yacht. The mahogany dining table to port seats up to eight guests, while to starboard, there are two solid mahogany coffee tables and a full-length settee. There are numerous sideboards, glass cabinets and lockers with a concealed hi-fi and television system. At the entrance is a bar with a drinks refrigerator.

Captain’s Cabin
Situated next to the navigation station and main companionway, it has a single berth, wardrobe and chest of drawers. There is an en-suite shower room with a basin and toilet.

Third in Class on corrected time

Second overall (out of 52 Superyachts) on corrected time

Second in Class on corrected time

Third in Class on corrected time

First in Class on corrected time

Second in Class on corrected time

2012 Round the Island Race - Cowes, Isle of Wight, England