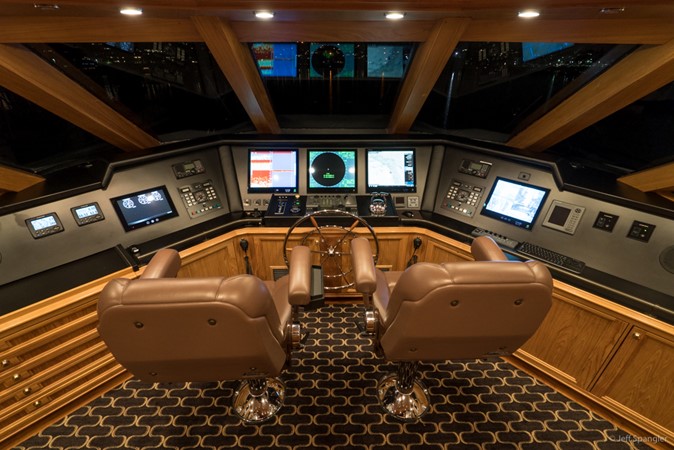 LIFE OF RILEY is a custom built Tri-deck Cockpit Motoryacht, designed for extended world cruising and long range fishing in comfort and safety. Designed for minimum crew requirements, easy to handle with 5 docking stations and bow and stern thrusters. The 5,000 pound center mounted crane allows for launching tenders aft or either side. There is an additional crane forward for use launching jet skiis which can be stored on the foredeck. Modern layout with on-deck master stateroom, very large VIP stateroom, plus two additional guest staterooms. The crew area includes a crew lounge with two separate crew staterooms and heads to accommodate up to four crew members comfortably if desired. LLC owned.  Complete new paint job 2020!  SEE VIDEO

• SUN LOUNGE - The main deck is accessed from either the port or starboard side entry doors or an entry door forward from the cockpit. Features include a bar equipped with a refrigerator, ice maker and a breakfast nook settee that seats six around a beautifully crafted, hydraulically operated hi/lo teak dining table and teak deck. A polished stainless steel spiral staircase to port leads to the boat deck. One of the unique features of the sun lounge is the outward opening and sliding glass windows around the perimeter giving a fresh air environment.

• SALON - Separated from the sun lounge by electric glass doors which operate either automatically by a motion sensor or by manually pressing an activation button. Similar to the sun lounge, the salon has four sliding windows allowing fresh air cross ventilation. The salon is extremely spacious, taking advantage of the full width of the generous 24' beam. The salon is designed with a formal dining area in the forward section, game table center and a comfortable lounge area featuring an entertainment center in the aft portion. These distinct areas of the salon are beautifully highlighted by the tasteful use of teak and beveled glass, illuminated cabinetry, indirect soft lighting and inset lighting details. One of the signatures of this custom yacht is the reflective ceiling soffit whose design compliments the graceful contours of the cabinetry. Forward of the entertainment center is a games table which seats four and cabinetry featuring built-in surround sound speakers for the television.

• GALLEY - Accessed either from the entry door inboard of the starboard companionway, immediately forward of the day head, or from the port main deck entry door. This allows the galley to have discreet entries and be entirely closed off from the remainder of the vessel and not disturb owner and guests. The galley is equipped with large commercial refrigeration units and has tremendous storage space, two very deep appliance garages, all upgraded appliances and a large U-shaped counter top.

• MASTER SUITE - At the forward end of the companionway, there is a king-size bed located on the center line of the stateroom with the head of the bed positioned on the forward bulkhead. On the port side of the stateroom is a built-in vanity with hinged top and make up mirror, equipped with stacked drawers beneath. A settee is located on the starboard side with teak counter tops and stacked drawers beneath. Entertainment includes a TV/stereo.  A large walk-in closet lined in Tennessee Cedar is located on the starboard side as you enter the room with a hidden safe. Completing the master suite is the en suite head & shower.  Completely new marble and shower and head 2014)

• VIP STATEROOM - Contains a queen-size berth positioned on the vessels centerline with large nightstands and bookshelves on both outboard sides. An entertainment center is built into the forward bulkhead and is enclosed in fine cabinetry. To starboard, a large dresser and the entry door leading to the en suite head. The stateroom contains the largest en suite bath aboard (new 2014).

• TWO DOUBLE GUEST STATEROOMS - Located at the end of the foyer, the staterooms are identical except that the port is equipped with twin berths and the starboard with a full-size berth. Both staterooms contain complete entertainment centers, desk, night tables, dresser drawers and a large hanging locker. The en suite baths are equally pleasing and equipped with enclosed showers (new 2014).

• SKY LOUNGE - features a large sectional leather couch and the view forward encompasses the full wheelhouse. This lounging area is equipped with television and stereo, icemaker, refrigerator and sink. A powder room is to starboard at the aft end.

• FLYBRIDGE - Seating is provided for three on custom built helm chairs with additional seating for six to eight located both port and starboard on the custom molded fiberglass benches. The flybridge has a complete helm station protected by a Plexiglas top and custom fitted canvas. Behind the helm seating is a hydraulically operated mast. Recessed lighting, floodlights, spotlights, aft facing cameras, stereo speakers and communication antennas are all mounted on the mast.

“Life of Riley” is a custom built Tri-deck Cockpit Motoryacht, designed for extended world cruising and long range fishing in comfort and safety.  Designed for minimum crew requirements, easy to handle with 5 docking stations and bow and stern thrusters. The 5,000 pound center mounted crane allows for launching tenders aft or either side. Modern layout with on-deck master stateroom, very large VIP stateroom, plus two additional guest staterooms.  The crew area includes a crew lounge with two separate crew staterooms and heads to accommodate up to four crew members comfortably if desired. The boat has always been based in the Pacific Northwest, boathouse kept in fresh water, until 2014 when the current owner purchased the boat and embarked on a two year extensive refit performed by Delta Marine and Crescent Marine Shipyards, which included the addition of an Atlas Electrical Converter system which enables the boat to accept European 50 cycle or US 60 cycle shore power, state of the art navigation electronics and sonar, complete satellite communications and internet as well as HD satellite television capable of receiving signals in US or Latin America throughout the boat.  New electronic controls at each docking station, new head system throughout, new air-conditioning system, extensive sound proofing and vibration abatement, new tender, Watermaker, 21’ Boston Whaler Tender, Maritron monitoring and safety system, complete HD audio / visual system throughout the vessel, new teak decks, very custom interior decorating, LED interior light fixtures throughout, new life rafts and much more.

The owner has enjoyed cruising the boat from Mexico to the Pacific Northwest.  October 2020 the yacht returned to the Builder Crescent Marine for a complete new exterior paint job, haulout and bottom paint and maintenance.  Ready for her next adventure!  LLC owned.  Shown by appointment. 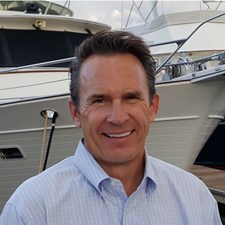 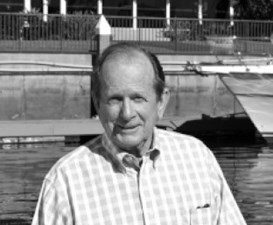