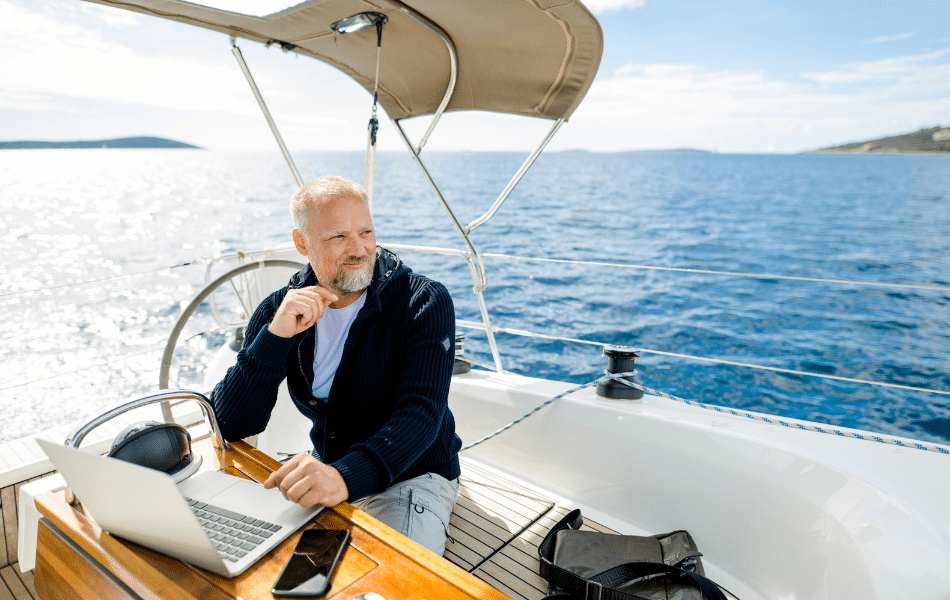 The recent race to buy yachts, spurred on by the pandemic, caused a ripple effect in several support industries, including marine WiFi and satellite systems. That’s why we thought now would be a good time to bring new and seasoned sailors up to speed on the numerous ways to stay connected while cruising.

Granted, sailing away is one of the best cures for our technology-obsessed world. However, after a week or two of being unplugged, you may decide you’d like to:

There are several ways to access the Internet from onboard your boat — some starting as low as $1,500. Of course, custom and high-end Internet satellite systems and global area networks are out there, too.

The very best of these come with a hefty price tag: $50,000 or more Ranked from least to most expensive and based on low-to-high data usage, the following options allow you to:

As if being hundreds of miles offshore isn’t challenging enough, your boat’s natural rocking and rolling makes it even harder to get and maintain an Internet signal. However, as with most things these days, there’s a new technology that makes it easier and more reliable. Check out the pros and cons of the following four options (listed from least to most expensive), and pick the one that best fits your yachting lifestyle:

If you’re docked at your favorite marina or anchored a few miles offshore, the least expensive and easiest way to access the Internet is to tap into the marina’s public Wi-Fi. If you have trouble picking up a signal or your connection is erratic or slow, you can always add a Wi-Fi extender to boost the signal and create a single seamless connection. While an extender costs more than a portable hotspot device, you won’t have to purchase a SIM card or cellular plan. Some extenders can even be mounted on your boat.

Unlike Wi-Fi, which uses radiofrequency waves to connect your mobile device to the Internet, a hotspot is a physical location in a public place that serves as an access point to Wi-Fi. Typically, your cell phone plan includes the cost of using your phone at a hotspot.

One of the best ways to stay connected as you crisscross oceans is with a fixed satellite system. About 22,000 miles up, orbiting satellites receive and send signals to earth – and your yacht – as long as you have a satellite dish. The cost for a fixed satellite system, including the dish, ranges from $3,000 to $50,000; plus, there’s a monthly charge for data based on megabytes used. Basic users can figure on spending about $50 a month. Multiple users who require lots of data could spend upwards of $2,500 a month. One solution: Add compression software, such as Inmarsat’s Fleet One or Inmarsat’s Fleet Xpress (for superyachts), to reduce the amount of data used by downloads and emails.

A broadband global area network, or BGAN, is an alternative to buying and installing a satellite on your yacht. A BGAN is a portable system offered by private companies. It is portable — about the size of a laptop or notebook — and serves as a mobile hotspot. BGANs can be linked with Wi-Fi, USB, Ethernet, or Bluetooth. All you need to connect is GPS and a clear sky view. The main difference between satellite and BGAN is cost. You can get a terminal for as little as $2,500 a month, but the data plan costs a whole lot more. A basic data plan gives you access to about 5MB of data for about $70/month, but once you go over the 5MB, you are charged over $6 per MB.

Yachts aren’t immune to cyber-attacks. In fact, you could think of them as sitting ducks, especially when they’re docked at a marina, harbor or port using WiFi or a hotspot. Neither of these public options is as secure as a virtual private network. A VPN encrypts your Internet traffic and disguises your online identity. If you have guests on board, remind them to take the same precautions they do on land: